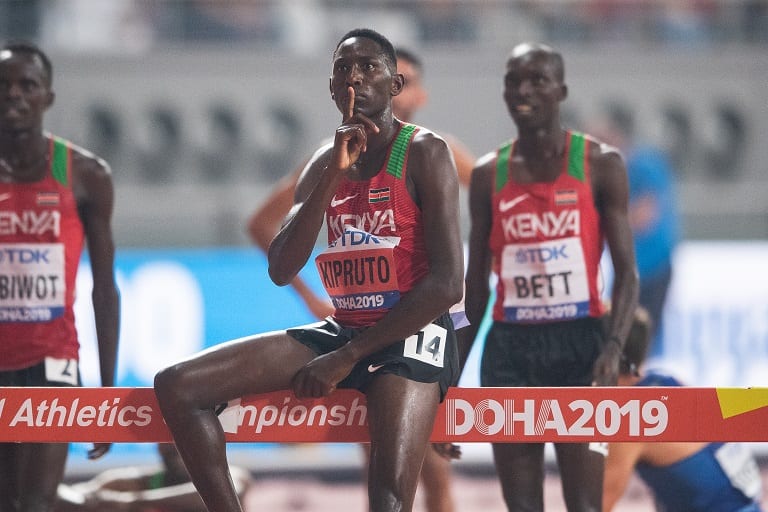 Beatrice Chepkoech: Women’s 3000m Steeplechase: Chepkoech came in as an overwhelming favourite. She has only lost one race since 2018 and has won most of her races by a significant margin. She did not dissapoint, winning the race easily. Never in the history of this race has anyone been so dominant. She is a natural hurdler and simply glides over each hurdle , making it look so easy as if she was jumping over a rain puddle. It is her graceful hurdling ability that makes her peerless

Hellen Obiri: Women’s 5000m: Hellen Obiri had started the 2019 season on a solid note. But as the world championships approached, her form appeared to dip. In the 10,000m race, a few days earlier, she had finished in 5th position albeit with a personal best. However she did not disappoint in the 5000m, staving off a strong challenge from German Konstanze Klosterhafen who challenged Obiri for much of the last lap. Compatriot Margaret Chelimo then passed the German with 30 metres to go to take second for a Kenya 1-2 Conseslus Kipruto: Mens 3000m Steeplechase: Kenya’s record in this event is the most impressive of any event in any sport. A Kenyan has won this event in every world championship and in every Olympic games since 1988.

However coming into this race, Kenya’s chances appeared bleak. Conseslus Kipruto, the defending world champion, had been struggling with injuries in 2019, including a broken foot. In fact he had not won a race in 2019. But Kipruto showed his mettle. He was locked in a battle with El Bakkali of Morocco and Girma of Ethiopia. The Moroccan made his move at the bell, surging ahead. But four runners caught up with him at the water jump.

With 70 metres to go, it appeared Girma was running away with the gold medal. But Kipruto summoned his last ounce of strength and with a last ditch effort, caught up with Girma at the finish line. It was a photo finish and both required a judge to determine whose torso crossed the finish line first. After tense moments, Kipruto was declared the winner. It was one of the most epic races in the history of the world championships. Timothy Cheruiyot: Mens 1500m:  Timothy Cheruiyot has been imperious in 2019. Nobody has come close to matching him. Compatriot Elijah Manangoi, the defending world champion, who has been his primary challenger for the last two years, pulled out of the championships. Cheruiyot was as dominant as usual, beating the field by a significant margin Faith Kipyegon: Women’s 1500m: Faith Kipyegon, coming back from a year-long maternity leave, finished second to Sifan Hassan who clocked an incredible time of 3:51:95, after having won the women’s 10,000m. A dark cloud hangs over her performance after her former coach Alberto Salazar was banned for four years for doping violations. Sifan’s drastic/dramatic improvement over the past year is considered suspect.

Ferguson Rotich: Men’s 800m: His first medal. This caps a career year in which he ran a personal best

Amos Kipruto: Men’s marathon: A valiant effort resulting in his first ever medal