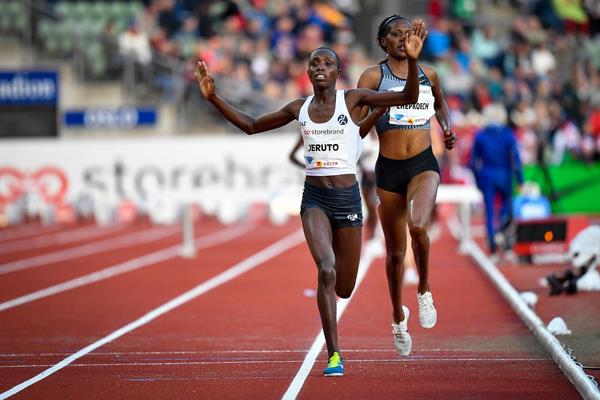 Norah Jeruto caused the biggest upset of the 2019 Oslo Bislett games, a Diamond League meet. She beat the erstwhile invincible Beatrice Chepkoech in a closely contested 3000m Steeplechase race. Chepkoech had gone a whole year without losing at this event and had been winning by convincing margins.

When Chepkoech took command 1300 metres into the race, it looked like she was once again going to run away with the race. But a determined Jeruto shadowed closely. She continued to follow Chepkech, finally making her move in the final straight. Chepkoech had no answer.

Hyvin Kiyeng rounded up the podium in 9:07.56. World champion Emma Coburn was fourth in 9:08.42. Celliphine Chespol, who was Chepkoech’s main challenger last season, and who has run sub 9:00, was 5th. Kenyans occupied 5 of the top 6 positions. The Kenyan men may be struggling in this event but the women are certainly dominant. European champion and 2015 wrld championships bronzde medalist, Gesa Felicitas Krause of Germany was 8th.