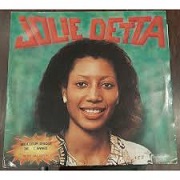 In 1986 Franco introduced a tall, elegant, beautiful singer / dancer with a heavenly voice. Her name was Kamenga Koyabote but she is popularly known by her stage name Jolie Detta. She stayed with TPOK Jazz long enough only to sing two songs: Masso and Layile. But these two songs are amongst the most memorable TP OK Jazz songs.

Below are the lyrics and translations of the second song in that album : Layile.