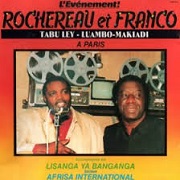 This classic song was composed and sung by both Franco and Tabu Ley after the passing of Joseph Kabaselleh , popularly known as Grand Kalle. He was the founding father of modern Congolese music. He was Congo’s first mega-star and his band Afrika Jazz had some of the greatest Congolese musicians like Tabu Ley and Docteur Nico Kasanda, both of whom cut their teeth at Afrika Jazz.