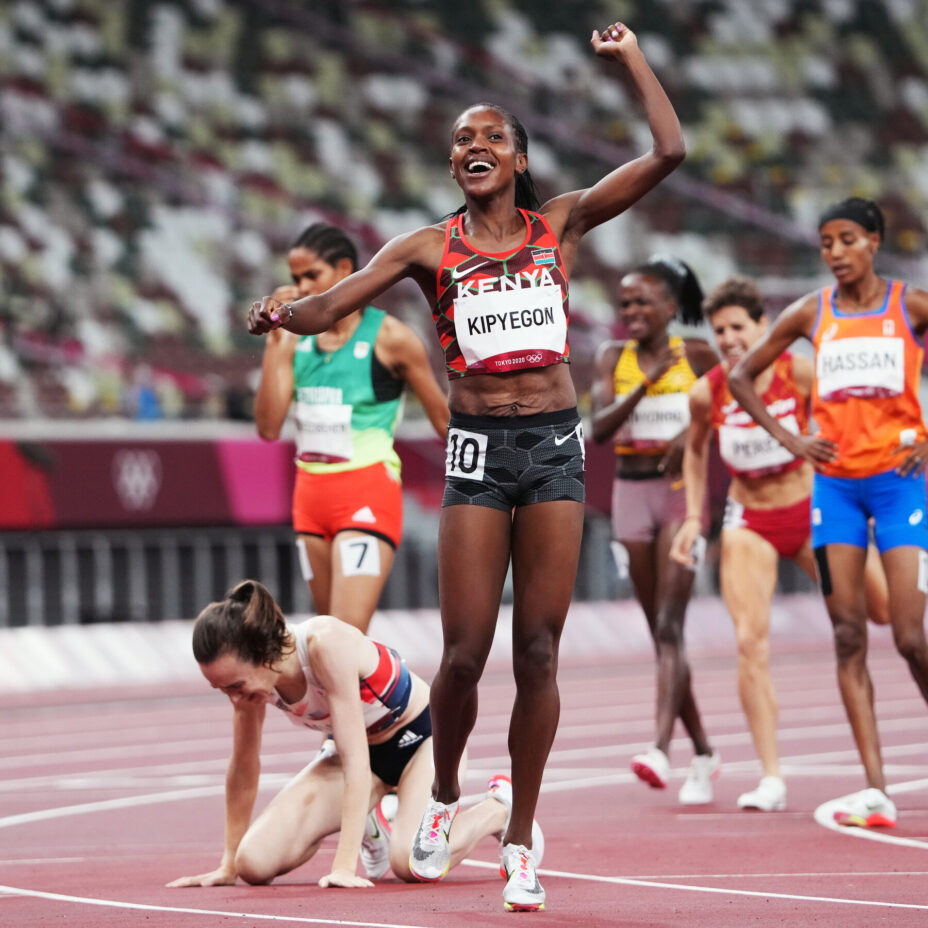 Coming into this race, Faith Kipyegon was the favourite. A fortnight earlier, she had beaten Sifan Hassan , the Dutch woman who was her primary rival. She did not disappoint. In the final, she trailed Hassan closely. With 250 metres to go, she accelerated. Hassan fought gamely having anticipated Kipyegon’s move. She held off Kipyegon for another 50 metres but Kipyegon had an extra gear which she applied with 200 metres to go, passing Hassan to win in an Olympic record of 3:53.11 .

Neither Emmanuel Korir nor Ferguson Rotich were expected to win. Rotich always seemed to get his tactics wrong in previous races whereas Korir appeared to be washed up after having a very promising early career.

In the final, Korir placed himself near the front runners with 300 metres to go. Then with 150 metres to go Korir made his move and passed Peter Bol of Australia to take a commanding lead. Ferguson Rotich left it late and passed two runners in the final 50 metres to take silver.

Marathon: Peres JepchirChir and Brigid Kosgei leave the field in a cloud of dust

Marathons are notoriously difficult to predict. However with World Record holder Brigid Kosgei and world half marathon champion Peres Jepchirchir in the race, Kenya had high hopes. The Kenyan duo seperated themselves from the field in the closing stages of the race. Molly Seidel of the USA maintained contact but eventually fell behind. In the end it was Jepchirchir who had the most closing speed, winning  in 2:27:20 with Kosgei taking second in 2:27:36.

Marathon: Kipchoge confirms status as the greatest ever 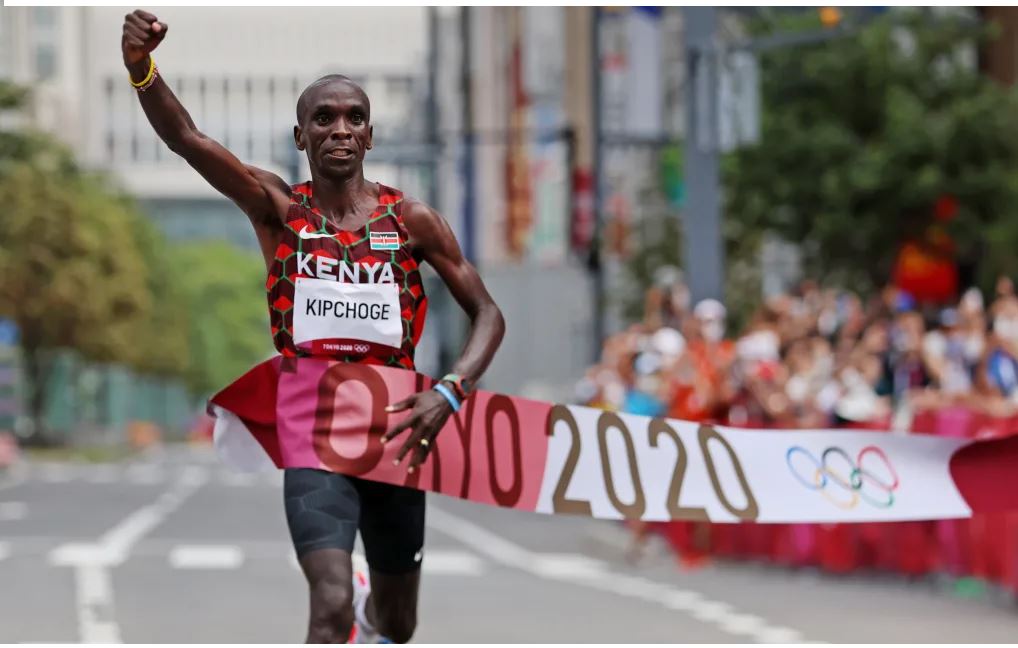 If there is any person who defies the unpredictability of the marathon, it is Eliud Kipchoge. He is the most reliable winner in history. He has won 8 out of 10 world marathon majors races that he participated in. And he had won the 2016 Olympics marathon.

Therefore much was expected from him this time around despite his advanced age (36). He did not disappoint. Once he made his move, he simply blew away the rest of the field who had no answer. He won in 2:08:38 , 70 seconds ahead of the second placed finisher. He thus cemented his place as the greatest marathoner.

World champion Timothy Cheruiyot had failed to qualify having finished fourth at the Kenya trials. However he was included after one of the qualifiers was eliminated on a technicality. Cheruiyot went on take silver behind Ingebritsen of Norway.

Hellen Obiri could not match the endurance of Sifan Hassan in the 5000m and ended up taking silver. The shock of the games came in the women’s 3000m steeplechase. World record holder Beatrice Chepkoech inexplicably finished 7th leaving Hyvin Kiyeng as the only Kenyan medalist. She took bronze in 9:05.39. In the men’s 3000m steeplechase, an event Kenya has always won, the prospects were bleak. World champion Conseslus Kipruto did not participate in the trials due to legal problems. It was left to Benjamin Kigen who took a creditable bronze medal.

Nick Okoyj was Kenya’s best performer. He lost in the first round by a score of 3-2 in a match many thought he had won. Heavyweight Elly Ajowi lost to eventual gold medalist Julio De la Cruz of Cuba in his opening bout. Christine Ongare lost to Irish Magno of Philipines in her opening bout. She had to keep adjusting her poorly fitted headgear and it cost her dearly. Elizabeth Akinyi lost to Alcinda Panguana of Mozambique.

The Kenya men’s sevens side dissappointed yet again. They lost all three opening round matches to South Africa, USA and Ireland. In the playoffs, they redeemed themselves, beating Japan and Ireland to take 9th place.

The womens team gave a good account of themselves despite losing to ROC, New Zealand and Great Britain. In the playoffs, they beat Japan before losing to Canada to finish in 10th place.

The Kenya women’s indoor volleyball team lost all 5 matches without winning a set. The team conceded 375 points and scored 242 points.

The Kenya women’s beach volleyball team of Bracksides Khadambi and Gaudencia Makokha lost all three games without winning a set. They conceded 126 points and scored 52 points. It was the first time Kenya had participated in beach volleyball and qualifying was a huge achievement.

Faith Ogallo was Kenya’s sole representative in Tae Kwon do. She had won a silver medal at the 2019 All Africa games. She participated in the heavyweight category (67kg). In the first match she lost 13-0 to the highly experienced Milica Mandic of Serbia. Mandic was the 2012 Olympic gold medalist and went on to win gold again in Tokyo. In the second match she lost to another highly experienced campaigner, Aleksandra Kowalczuk of Poland who was European champion in 2018.

In swimming, Kenya’s representatives Daniel Rosafio and Emily Muteti were ranked 56th and 43rd in their respective events.