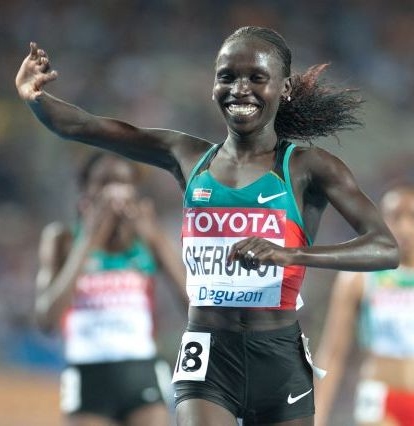 The 2011 World Athletics Championships was held in Daegu, South Koreafrom 27 August 2011 ending on 4 September 2011. Kenya recorded its best ever performance up to that point, hauling 7 gold, 8 silver and 3 bronze for a total of 18 medals. They finished second in the medal table behind the USA. Kenya was particularly dominant in the women’s distance events, sweeping all the medals in the 10,000m and the marathon and taking the top two spots in the 5000m.

David Rudisha had a brilliant junior career, winning the World Junior Championships in 2006. But as his senior career started, it seemed he would be one of many athletes who shone brilliantly in the juniors but struggled to find success in the seniors. During the 2009 world championships for example, a tactical error in the semi-finals saw him fail to make the finals.

But by 2010, it became apparent that Rudisha was going to fulfill the promise of his youth career. In 2011, he set a new world record. Thus coming into these championships, he was the firm favourite. He did not disappoint as his long strides left the competition in his wake, allowing him to win fairly comfortably in 1:43.91.

In the previous championships, Kenya had a sub-par  performance in the men’s 1500m despite having the three athletes with the fastest times in 2009: Asbel Kiprop, Augustin Choge and Haron Keitany. Kiprop, the Olynmpic champion, finished 4th. Choge was and 5th and Keitany suffered an injury in the semis.

In 2011, Kenya was determined to make amends as they fielded yet another strong trio: Kiprop, Silas Kiplagat and Daniel Kipchirichir Komen.  They did not dissapoint. In the final, Kiprop and Kiplagat both ran a tactically astute race to take gold and silver.

Ezekiel Kemboi had won this event in 2009 after three unsuccessful tries. One of the runners who had beaten him to gold on occassion was compatriot Brimin Kipruto. Kemboi thus took no chances, accelerating at the back straight which is where he usually makes his move. Kipruto gave chase but when he realized he would not catch Kemboi, he slowed down significantly and was almost passed by French runner Bennabad.

Abel Kirui gave what was described as the most dominant performance in the history of championship marathon running. Kirui finished about half a mile ahead of the rest of the field to win the title for the second time in a row. Running in extreme heat and with a humidity of 65%, Kirui produced a burst in the last quarter of the race that the rest of the field was unable to match. He finished in 2:07:38 . Compatriot Vincent Kipruto was second in 2:10:06

Vivian Cheruiyot was the most dominant distance runner of the 2011 season. She thus came into this race as the overwhelming favourite. She did not disappoint. She ran a tactically brilliant race, gradually increasing the pace from the 4.4 km mark. At the bell started to pull away from the leading group. Ethiopian legend Meseret Defar gave chase

It was an exact repeat of the 2009 edition. For the second successive time, Vivian Cheruiyot and Sylvia Kibet occupied the top two positions, relegating Defar to third place. And as was the case two years earlier, Defar was broken by Cheruiyots surge to the point that she forfeited second place to Kibet at the finish line again.

It was thorough and complete dominance by Kenya in the women’s 10,000m as the top four finishers were all Kenyans. It marked only the third time that a country had occupied the top four positions in any event. Vivian Cheruiyot set the pace over the final two laps as is typical of her. At the bell, the four Kenyans seperated from the rest of the pack with only Meselech Melkamu of Ethiopia, the previous silver medalist  staying in tow. When Cheruiyot broke away, Sally Kipyego gave chase but was soon unable to keep up. Melkamu then positioned herself for third pace but could not fend off the other two Kenyans.In the end, Cheruiyot won comfortably folloed by Sally Kipyego, Linet Masai and Prisca Cherono.

It was complete domination for Kenya in the women’s marathon. Kenya swept all three medals with Edna Kiplagat, Priscah Jeptoo and Sharon Cherop taking gold, silver and bronze respectively. This despite a collision at a watering station between Kiplagat and Cherop that knocked Kiplagat down. Cherop waited for Kiplagat to rise before continuing. The Kenyan trio pulled away with 5km to go. Only Bezunesh Bekele of Ethiopia stayed in touch. But she was soon broken by the Kenyan trio.

This was the first time that a country had won all the medals in a marathon at either the Olympics or the World championships and as of 2019, still the only time.