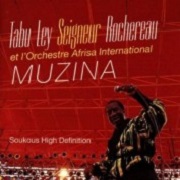 The album “Muzina” was released in 1994. The title track is actually a gospel song in which Tabu Ley exhorts everyone to pray to God, praise God and thank God for his blessings.

During this period, Tabu Ley had run afoul of Zairean president Mobutu sese Seko who threatened him after Tabu Ley had criticized him. Fearing for his life, Tabu Ley left Zaire and settled in California where he released a number of albums including Muzina. 1 thought on “Muzina by Tabu Ley (Lyrics and translation)”