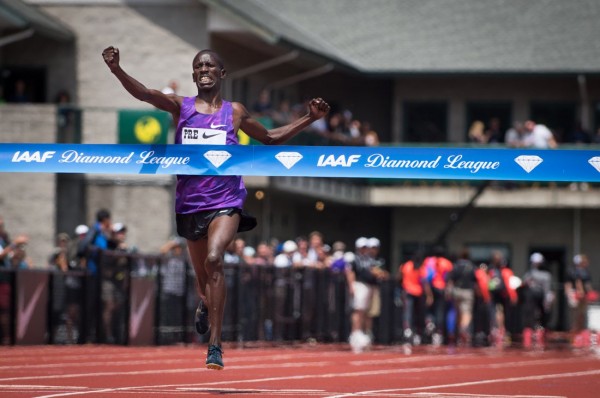 Eunice Sum and Ezekiel Kemboi were the only Kenyan winners at the 2015 Prefontaine classic in Eugene Oregon. This meet is part of the 2015 Diamond League circuit.

Ezekiel Kemboi is one of the greatest athletes Kenya has ever produced. A true legend, he has been dominating the 3000m steeplechase event for a decade, winning multiple world championships, Commonwealth and Olympic gold medals. Such consistency and longeveity is rarely seen in Kenyan athletes.

However the 2014 season whttp://kenyapage.net/commentary/wp-admin/post.php?post=4753&action=editas a down one for Kemboi. For the first time, he looked over the hill and ready to cede the crown to Jairus Birech who thoroughly dominated this event in 2014.

However on Saturday in Eugene, Oregon, at the Prefontaine classic, Kemboi dispelled any notion that he was ready to step aside. Both  Kemboi and Birech ran faster than the meeting record of 8:03.59. The two Kenyans were the only two remaining contenders at the final water jump. Kemboi emerged with a slight lead off the barrier and held it all the way to the finish, winning in 8:01.71 with Birech second in 8:01.83. Sum and Ajee came home clear of their rivals. Ajee Wilson with a shot of adrenalin from the crowd support gave Sum a scare. But Sum just held off the American and took the win, and the world lead, in 1:57.82. Wilson was just 0.2 away from her personal best in second place with 1:57.87.

Farah proves he is still the man to beat

Kenya’s world cross country champion and world half marathin champion Ezekiel Kamwror is the man whom Kenyans are counting on to end the reign of Mo Farah as 10,000m champion. However on Saturday, Farah in a masterful display, showed that Kamworor still has a long way to go. Farah won the race in 26:50.97, Paul Tanui of Kenya was second in 26:51.86  with Kamworor third in 26:52.65

It was a good learning experience for Kamworor. With the 10,000m race rarely featured, he has had very few opportunities to sharpen his tactics. And against a masterful tactician like Farah, he will need to get his tactical approach in order before the world championships.