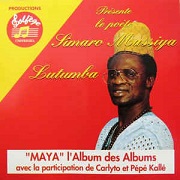 This classic hit from 1985 was composed by Lutumba Massiya Simaro, who was Franco’s trusted lieutenant. However Franco considered the song a betrayal because Simaro recorded it outside the TPOK Jazz system while Franco was away on a extended stay in Europe. It was recorded at the IAD studios in Brazzaville.

Franco was said to be livid when he found out about the album. But Simaro was such a crucial member of the band that the duo soon patched up their differences. Around the same time, Papa Noel also recorded a song outside the TPOK Jazz system. The album was titled “Bon Samaritan” and was also recorded at IAD. Unlike Simaro however, Papa Noel never reconciled with Franco.

Maya was a huge hit all over Africa especially East Africa. It was voted Zairean song of the year for 1985 with Bon Samaritan finishing second in the voting. The vocals for Maya were supplied by Lassa Ndombasi, popularly known as Carlito. It was the song that propelled the previously unknown singer to fame. He would also supply lead vocals for Bon Samaritan.

This song describes the lamentations of a disappointed man who has repeatedly tried
to keep his wife, without success. The woman is capricious and returns after every argument with her
husbnd. She has repeatedly deserted the household, or even asked for a divorce. But, her husband
always managed to convince her to come back. Her husbands friend takes advantage of the situation to woo the woman.

Finally, she gives in to his game and leaves her husband for good. But the man’s love for his wife
keeps him hoping that she will come back.

In typical Simaro style, several poetic images are described to express the man’s love for his
wife. A taste of water next to the river means that the absence of his wife reduces him to his
simplest form; To be afraid of a lizard when one has already been bitten by a snake means to become
cautious not to make the same mistakes. Her penchant for always returning to her parents house emphasizes the illogical nature of women; Even if the night is very dark the dawn is always bright which means at the end of every problem has a solution; to hurt your tongue is a bad omen.

This is why Simaro was dubbed “Le Poete”