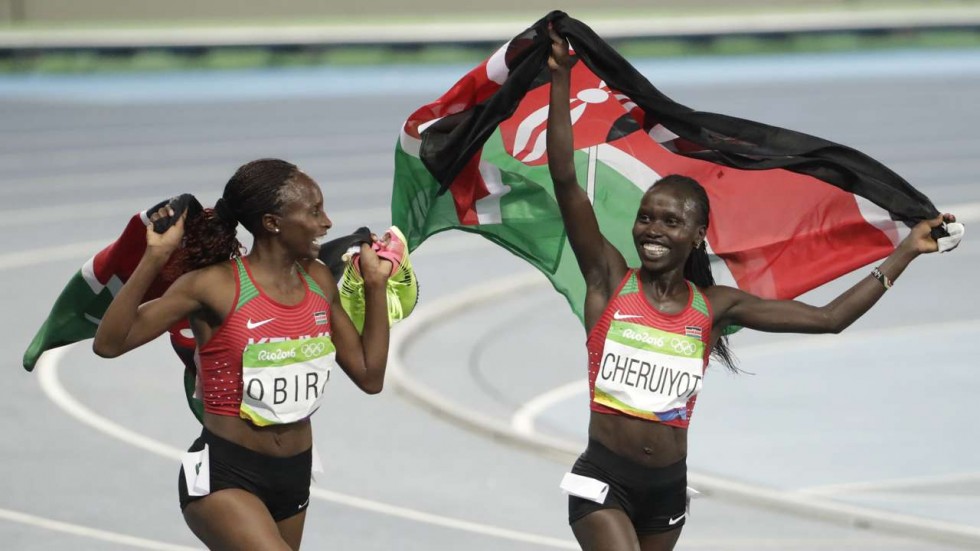 Kenya ended the 2016 Olympics ended Olympics with a medal haul of 6 gold, 6 silver and 1 bronze, arguably Kenya’s best performance yet, only rivaled by 2008 when Kenya hauled 6 gold 4 silver and 4 bronze. It was Jemima Sumgong who started Kenya’s gold rush with a superb win in the women’s marathon, finishing ahead of Eunice Kirwa a fellow Kenyan who was running for Bahrain. At the 35km mark, the race had been reduced to a battle between Sumgong, Mare Dibaba of Ethiopia and Kirwa. At the 40km mark, Dibaba fell off the pace leaving Kirwa to battle with Sumgong. It was then that Sumgong made her final surge for which Kirwa had no answer.

Coming into this race, Kipyegon had run the fastest time of the season in the 1500m. Her nemesis Genzebe Dibaba was having a quiet year when compared to 2015 where she won every race in dominant style including the world championships. Still , given Dibaba’s calibre, she was considered the favourite. The first 700m of the race were as slow as molasses. But with two laps to go, Dibaba made her trademark surge. Kipyegon followed in tow. Kipyegon would surge past Dibaba with 200m to go and show the rest of the field a clean pair of heels. She covered the last 800m in an incredible time of 1:56.
Upon crossing the finish line, Kipyegon was overcome with emotion. Perhaps it is because despite having shown a lot of promise as a youth, and despite always being among the top milers in the last 3 years, Kipyegon never looked she would win an Olympic or world championship gold. However in 2016, she showed a lot of determination from the very beginning of the year when she was winning races in 3:56. Going into the 2016 games, Kenya had thoroughly dominated the 3000m steeplechase in a manner that no other country has dominated any event. Indeed since 1968, Kenya has won this event every time they participate. The only times they did not win was in 1976 and 1980 when Kenya withdrew from the Olympics.
The young Conseslus Kipruto who has been the top runner in 2016, maintained Kenya’s tradition with a commanding win, beating Evan Jager of the USA to second place. The bigger story of the event however was the disqualification of legend Ezekiel Kemboi. He was disqualified for stepping inside the track. He had been jostled by an Ugandan and Ethiopian runners, lost his balance and ended up taking three steps inside the track. Though he gained no advantage, he was disqualified after an appeal by France on behalf of Maheiddine Mekhissi Bennabad who was classless throughout, flashing three fingers as he crossed the line to indicate that Kemboi had taken three steps inside the track.
Kemboi who had earlier announced his retirement from the event, soon rescinded his retirement saying he wanted to come back at the 2017 world championships and reclaim the medal that was stolen from him. Veteran Vivian Cheruiyot put aside her disappointment from the 10,000m where she had settled for silver to win the women’s 5000m. Going into the race, Ethiopia’s Almaz Ayana was considered the hot favourite. She had dominated the 10,000m a week earlier and she had been invincible in the 5000m for the past two years. She had been winning races by surging at the halfway mark of each race and setting up an unassailable gap from the rest of the field. So when she took off on one of her surges, all observers must have assumed it was curtains closed for the rest of the field.

But the Kenyan duo of Vivian Cheruiyot and Hellen Obiri stayed in shouting distance of Ayana. And when Ayana began to tire, the Kenyan duo made their move and surged past Ayana who had no answer. The race showed how difficult it is to win several races with the tactic that Ayana applies.

For Cheruiyot, it was a huge victory, marking the first Olympic gold medal in her illustrious career that started in 1999 when she was only 15 and ended up winning the bronze medal at the All Africa games. Both Obiri and Cheruiyot were also returning from recent maternity leave which is significant achievement. Most women runners find it difficult to return to top form after maternity. Some simply lose their motivation. It goes without saying that Rudisha is the greatest 800m runner the world has ever seen. In 2012 he won the gold medal with what was touted as the best performance of the entire Olympics. Not only did he set a new world record but he also became the first man to dip below 1:41. But going into the 2016 games, he was not the overwhelming favourite. After the 2012 win, Rudisha was plagued by injuries such that he was beaten to second place at the 2014 Commonwealth games. Many a runner would have lost their motivation after having already accomplished so much. But Rudisha clawed his way back tio the top. He switched his tactics from the front running style that he used before 2012 to a simply controlling the pace of the race, a tactic he used to win the 2015 world championships.
Doubts emerged when he almost did not qualify for the Olympics. It required late surge for him to win 3rd place at the Olympic trials. But he quickly dispelled those doubts when he ran the fastest time of the season a week later in Hungary.
In the Olympic final, compatriot Alfred Kipketer set a torrid pace in the first lap but soon tired himself out, paving way for Rudisha to control the rest of the race and win in grand style.

The Olympic and world championships marathons are notoriously difficult to predict. Runners who dominate city marathons like Wilson Kipsang often struggle while runners like Stephen Kiprotich of Uganda who are miserable at City marathons, have been known to win.
However coming into the Olympics, Eliud Kipchoge had won 5 of 6 marathons in which he had entered. His only race was s second place finish in the Hamburg marathon which was his first ever marathon. Saying that Kipchoge always brings his A game is therefore an accurate assessment.
On this day, Kipchoge did disappoint. He stayed with the leading pack until the 35km mark before making his surge to pull away from the field.
And he did so despite the incompetence of the Kenyan officials resulting in him not getting his water at one of the watering stations.

Surprise silver medal for Tumuti in the 400m hurdles
Not much was expected from Boniface Mucheru Tumuti. He had reached the final of this event at the 2015 world championships but finished 7th in a race that was won by compatriot Nicholas Bett. Indeed afthe form-chart suggested another 7th place finish for Tumuti. However he surprised everyone when he grabbed a silver medal with a late surge in the final 50m. The race was won by American veteran Kerron Clement. Tumuti was closing down so fast that had the race been 20 metres longer he might have won.
Kenya is now a glorious era for the 400m hurdles with Bett and Tumuti winning medals at the world championships and Olympics respectively. From a cardiovascular standpoint, the 400m hurdles is very similar to the 800m, which is an event Kenya has dominated for years. What was missing was the technical training that is needed for this event.
Other Silver medals came via Julius Yego who won silver in the javelin. He might have won gold had he not been sidelined with an injury.  Paul Tanui who battled Mo Farah in the 10,000m, Vivian Cheruiyot in the 10,000m, and Hyvin Kiyeng in the women’s 3000m steeplechase. Margaret Wambui won Kenya’s only bronze with a late surge in the women’s 800m

In addition, Kenyan runners won medals for other countries: Ruth Jebet won gold for Bahrain in the 3000m steeplechase. Eunice Kirwa won silver for Bahrain in the marathon and Paul Chelimo won a silver medal for the USA in the 5000m.