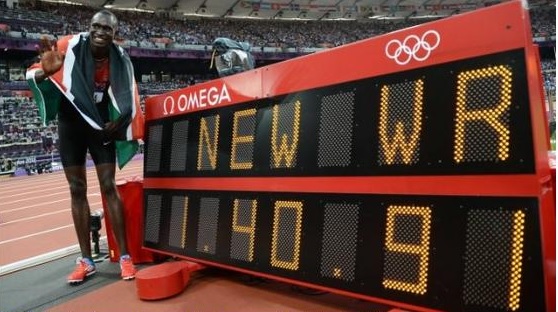 The 2012 Summer Olympics were held from 27 July to 12 August in London, United Kingdom. After a stellar performance in 2008, the 2012 games were a relative letdown as Kenya ended with 2 gold 4 silver and 7 bronze medals. This was good enough for 6th place in the Athletics medal table and 30th place overall.

David Rudisha came into this race as the hot favourite, having set a world record two years earlier in Rieti. He did not disappoint. In classic Rudisha fashion, he led from start to finish. The first lap was ran in a super fast time of 49.22, which indicated a possible world record. After the bell, Rudisha went up a gear utilizing his long strides. He finished in a world record time of 1:40.91, thus becoming the first man ever to run the 800 metres in under 1:41. He also dragged the rest of the field into running personal bests. In addition, second placed Nijel Amos set a new world junior record. Timothy Kitum of Kenya, who was 17 years old at the time, took the bronze medal. Mohamed Aman of Ethiopia set a new national record while finishing 6th.

In the 2008 Olympic final, Ezekiel Kemboi pulled up lame in the last lap and finished well out of medal contention. In 2012, the roles were reversed. This time Brimin Kipruto fell down in the second last lap and was unable to recover. He finished 5th. It was left to Kemboi to keep Kenya’s streak going. Kemboi was up to the task. At the bell, Ethiopian Roba Gari was leading. Kemboi trailed him until the bask straight when he suddenly shifted gears and took the lead. Abel Mutai, Roba Gari and Makhiedine Benakhissi gave chase. Kemboi was too strong however, finishing so far ahead of the field that he finished in lane 8. Mekhissi to second place and Mutai took the bronze medal.