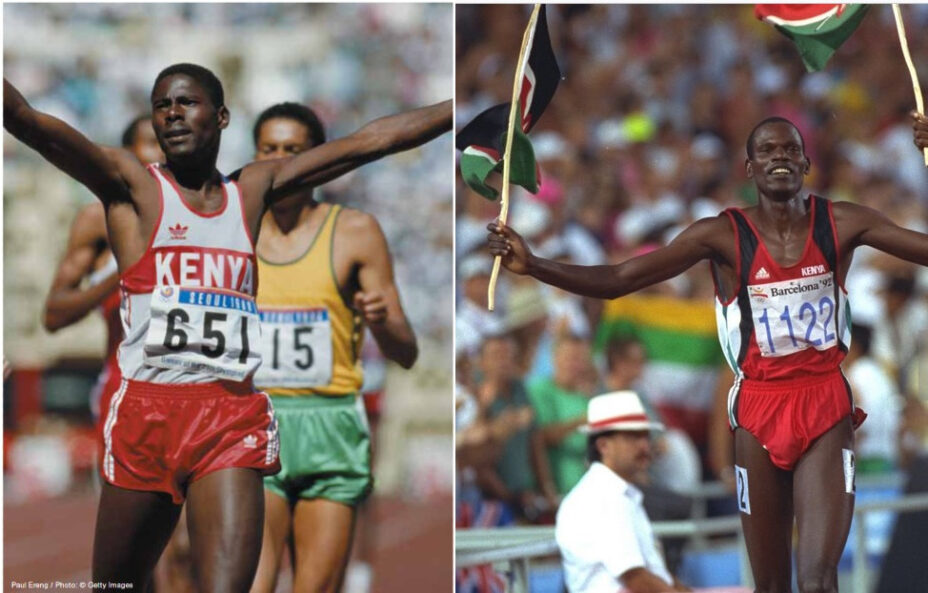 The men’s 800 metres at the 1988 Olympic games was one of the greatest examples of teamwork by two compatriots. In this case it was Nixon Kiprotich and Paul Ereng.

At the trials the trials, the top three finishers were selected. New sensation Nixon Kiprotich who first.  Veteran Juma Ndiwa finished second and qualified for his second Olympics. Ndiwa had been Kenya national champion several times starting in the early 1980s. In third place was Paul Ereng who finished only one hundredth of a second ahead of fourth placed Sammy Koskei.

The fourth placed Koskei had set an African record four years earlier. The record lasted 25 years until David Rudisha broke it in 2009. Koskei had also been Africa champion in 1984 and 1985. As such he was a favourite of both fans and officials. Despite his illustrious record, Koskei had failed to qualify for the 1984 Olympics, narrowly missing a place by finishing behind Billy Konchellah, Juma Ndiwa and Edwin Koech. By 1988, he was still one of the top 800m runners. He had run 1:44.09 that year which made him the 9th fastest in the world.

Paul Ereng for his part was an unknown quantity and a nobody in athletics. While a student at Starehe Boys centre, he excelled in the 400m. His excellence in the long sprint earned him an athletics scholarship to the University of Virginia in the USA. He had only switched to the 800m in 1988 and had only won one out of seven races.

With Ereng being such an unknown quantity, many athletics fans and officials were unhappy that he had qualified ahead of Koskei who as was mentioned above, still held the Africa record. There was a strong push by officials to have Koskei selected for the games instead of Ereng. However justice prevailed and Ereng went to the Olympics.

Ereng and Kiprotich were both impressive in the preliminaries, both winning their semi-final heats. Juma Ndiwa fell by the wayside in the quarter-finals.

The final was a collection of superstars. First there was defending champion Joaquim Cruz of Brazil who had also run the second fastest 800m ever. Then there was Peter Elliott of Brazil who had won the silver medal at the 1987 world championships. There was the American Johnny Gray who had won the Pan American games a year earlier. Brazilian Jose Luis Barbosa had won the bronze medal at the 1987 world championships. And finally Moroccan Said Aouita, perhaps the greatest distance runner of the mid 1980s.

With Kiprotich and Ereng both winning their respective semi-final heats, it was clear that both were contenders for the gold medal. But the Kenya camp had to devise a strategy to beat the strong field. The The Kenya camp decided to have Kiprotich act as a decoy, set a torrid pace in the first lap and tire the other contenders. Ereng from whom nothing was expected, was to stay at the back of the pack and use his powerful finishing kick in the last 200m when the other contenders were tired.

The plan worked to perfection. Kiprotich took off like a bullet and the two dangerous  Brazilians chased and tried to keep up with him. The first lap was run at a torrid pace of 49.54. With 300m left, Elliott joined the chasing pack. Kiprotich surged into the lead with 250m left. Cruz tried to pass him at the final bend. Kiprotich glanced at Cruz and gritted his teeth again to keep up with Cruz. In the process Kiprotich forced Cruz, Elliott and Aouita to run a wide berth. Meanwhile Ereng made his move in the inside lane with 120m to go. Using his loping strides, Ereng passed Elliott, Aouita and Cruz, leaving them stunned.

Ereng had won and silenced his detractors. It marked the first time that Kenya had won the 800m at the Olympics. Wilson Kiprugut and Mike Boit had won silver and bronze in 1968 and 1972 respectively.