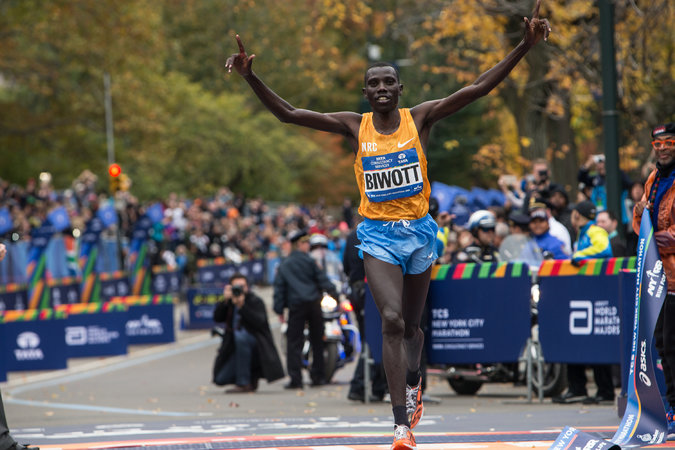 Biwott won by leaving his surge to the very end. Desisa made his surge at the halfway mark.and whittled the leading pack to eight. Geoffrey Kamworor surged to the front at the 20 mile mark and clocking a 4:24 mile. The surge broke Kipsang and Desisa, leaving only Kamworor and Biwott. However Kamworor soon fell back after having expended his energy on the surge. Biwott ended up winning in 2:10.34.

Biwott becomes the fourth successive Kenyan winner after Geoffrey Mutai who won twice and Wilson Kipsang who won in 2014.

Mary Keitany’s win was impressive by the sheer distance by which she beat the field. She produced an incredible turn of speed over the last 5 miles to win in 2:24.25. She finished a good 1:07 minutes ahead of second placed Aselefech Mergia.

At the 20 mile mark, the leading pack had four runners: Priscah Jeptoo, the 2013 winner,  along with the Ethiopian duo of Tigist Tufa and Mergia,. That was when Keitany produced a burst of speed that broke the leading pack.

Keitany became the first woman to successfully defend her title at the New York City Marathon since Paula Radcliffe in 2008, and afterwards, the 33-year-old said much of her performance can be credited to previous race experience.

“I learned lessons here in 2011, so today I had to be patient and wait,” she said. “I was very confident coming here. At home my training was perfect and I was coming to defend my title. It helped that I understood the course, as the field was very tough.”