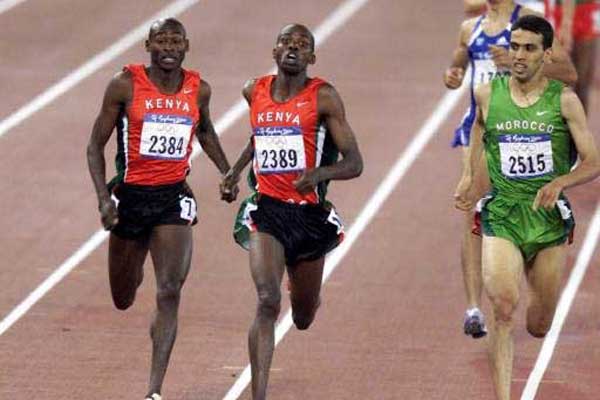 The 2000 Olympics were held in Sydney Australia from 15 September and 1 October. Kenya finished with 2 gold 3 silver and 2 bronze medals.

Prior to this race, Morocco’s Hicham El Guerrouj had dominated this event for 3 years. He had won the World championships in 1997 and 1999. In 1998 , he had set a new world record in this event with a time of 3:26.00 which obliterated the previous record by more than a second. As such he was expected to win the race easily.

But Kenya’s Noah Ngeny had a surprise up his sleeve. Morocco deployed team tactics as they had done at the world championships with Youseff Baba setting a torrid early pace that suited El Guerrouj. With Baba tired, El Guerrouj took over the pace setting duties at the 700m mark. He led for the next 600m. With 150 metres to go, Ngeny and Bernard Lagat made their move. Ngeny shocked El Guerrouj with a sudden turn of pace in the last 50 metres. El Guerrouj had no answer but was able to hold off Lagat who took silver. In winning, Ngeny set a new Olympic record at 3:32.07

Ngeny’s gold is one of the most memorable in Kenya’s illustrious Olympic history. And he was only 21. His future looked bright. Sadly, the following year, he was involved in a car accident and despite returning to running in time for the 2001 season, he was unable to regain his previous form.

Kenya had dominated this event thoroughly during the 2000 season. In this race they fielded a very strong team with Bernard Barmasai, Wilson Boit Kipketer and Reuben Kosgei Seroney. A clean sweep seemed possible. But doubts began to be raised due to the slow pace of the race. With 200 metres to go, there were nearly six runners in contention. It seemed plausible that Kenya’s dominance in this event would be ended, especially when Luis Martin of Spain briefly took the lead with 200 metres to go.