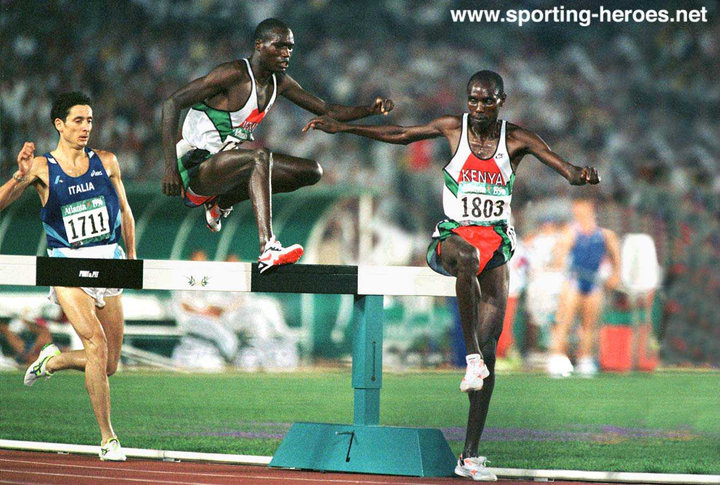 The 1996 Summer Olympics were held from July 19 to August 4 in Atlanta, Georgia, USA. Kenya won 1 gold 4 silver and 3 bronze in what was considered a below par performance by the country. The 1996 games happened at the beginning of the advent of the EPO era. Kenyan athletes were way behind the curve-ball.

The 1996 games marked the first time that a Kenyan woman won an Olympic medal. It came courtesy of Pauline Konga who took silver in the 5000m. Sadly she lost the gold medal to Chinese runner Wang Junxia who later admitted to have doped as part of the Chinese State sponsored doping scheme run by coach Ma Junren.

Kenya had won all three medals at the previous Olympics. Another clean sweep was a distinct possibility especially when the Kenyan trio of Moses Kiptanui, Joseph Keter and Mathew Birir were leading at the bell. Kiptanui had led for much of the race. He thus did not have enough petrol in the tank to challenge Keter when the latter made his move after the second to last barrier. Keter took gold. Kiptanui settled for silver. Birir, unable to keep the pace, faded to 4th position.

Pauline Konga’s silver medal was the most memorable event for Kenya at these games as she became the first Kenyan woman to win an Olympic medal. In the men’s 10,000m, Paul Tergat was engaged in an epic battle with Haile Gebreselassie of Ethiopia who beat him at the finish line. Paul Bitok also took silver in the 5000m. Fred Onyancha, Stephen Kipkorir and Eric Wainaina took bronze medals in the 800m, 1500m and the marathon.