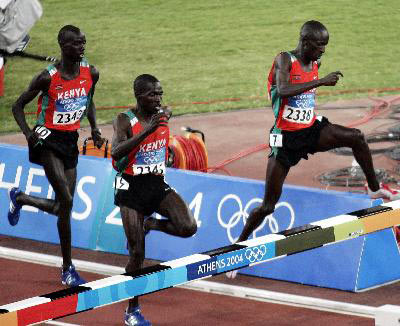 The 2004 Summer Olympics were held in Athens Greece from 13 to 29 August. Kenya finished with 1 gold 4 silver and 2 bronze. The 2004 games came at a time when a test for EPO had just been formulated but had not been approved for out of competition testing. As such Kenya had a torrid time in the distance events.

This event was the only bright spot for Kenya. It was a very strong team consisting of Ezekiel Kemboi, Paul Kipsiele Koech and Brimin Kipruto. Perhaps the strongest team Kenya has ever fielded in this event. The trio did most of the front running. They were occassionally challenged by Kenyan born Qatari, Musa Abeid Omer (formerly Moses Kipkirui and by Spaniard Eliseo Martin. In the end, Kemboi finished well ahead of everyone, Kipruto was second while Koech did enough to fend off Omer for bronze.