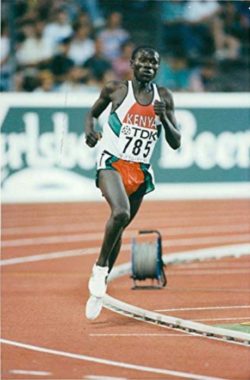 The 1993 world championships were held in Stuttgart Germany. This was the 4th edition of the world athletics championships. It was also the first time the event was being held in a two year cycle. Kenya did well winning three gold medals.

But the most notable performance was that of sprinter Samson Kitur who won a bronze medal in the 400m and anchored the 4 X 400m to a silver medal. There were also memorable and surprise performances from Paul Ruto and Ismael Kirui.

Kenya sent a very strong team for the 800m that comprised of defending world champion Billy Konchellah and defending Olympic champion, William Tanui. The other Kenyan was the unknown Paul Ruto. In the final, Ruto was designated to be the pacesetter for Konchellah and Tanui. He did his duty but to everyone’s surprise, he never relinquished his lead. It was one of those rare occasions when the pace-setter ended up winning the race. Tanui faded badly. Konchellah mis-timed his finishing kick, leaving it too late. He ended up third. Ruto was a late bloomer. At 33 he had never qualified for a major event, much less won any. Literally nothing was expected from him. Most pundits even doubted he would reach the final. It was and still is one of the biggest surprises in the history of the event.

Not much was expected from Ismael Kirui who at 18 was competing in his first international event. The heavy favourite was the Ethiopian Haile Gebreselassie. His compatriot, the experienced Fita Bayisa who won silver in 1991 was also in the race. Also in the race was the experienced Moroccan Khalid Skah who had won Olympic gold a year earlier and had won the world cross country championships twice. He had run the fastest 5000m of that year. The other Kenyans in the race was Paul Bitok, the 1992 Olympic silver medalist and Mike Chesire, a brother to multiple Olympian Joseph Chesire. Mike Chesire set the early pace.

After a mile, Kirui started to set a torried pace, unleashing a 62 second lap followed by a 60 second lap. By  the 2000m mark, Kirui was 20 metres ahead of the field. By 3500m, Kirui was in world record pace and was 40 metres ahead. It was at this point that the Ethiopians started to chase using team tactics. Skah tagged along with the Ethiopians. With two laps to go, Kirui had slowed to 13:04 pace and it looked like he might start to fade. His second lt last lap was 64 seconds and by the bell, his lead had been reduced to 30 metres and the chase intensified. The Ethiopians started to pick up the pace and Skah faded. With 200m to go, the lead was down to 20 metres and Geb and Bayisa started to sprint. Geb closed the gap significantly and finished only a few metres behind Kirui. But Kirui held on for a famous win.

It was a revenge mission for Kirui on two front: A year earlier, Skah had beaten his brother Richard Chelimo in controversial circumstances at the 1992 Olympics. A month earlier, Gebresellasie had beaten him in the world junior championships. In the end Kirui beat both Skah and Geb and obliterated the world junior record. He also broke the championship record that had been set in spectacular fashion by Yobes Ondieki in 1991. At the time, it was the 6th fastest time in history. Kenya fielded a very strong line-up in this event. Moses Kiptanui was the defending world champion and world record holder at the time. Mathew Birir was the defending Olympic champion. While Patrick Sang had won the silver medal at the world championships in 1991 and again at the Olympics. In the end, Kiptanui and Sang repeated their 1-2 finish from 1991. Birir ended up in fourth position.

Samson Kitur best performance ever by a Kenyan sprinter

Samson Kitur’s performance at the 1993 world championships was one for the ages. Firstly in the 400m race, he won the bronze medal. He finished behind the legendary Michael Johnson and follow American Butch Reynolds who would later be busted for doping.

But it was in the 4 X 400m race that Kitur left his mark. He ran the anchor leg for team Kenya. Upon receiving the baton, Kenya was in 6th place and looked out of contention. Kitur wan a stormer of an anchor leg, taking Kenya to second position and the silver medal in 2:59.82. No Kenyan team has run that first since then. A year earlier he had anchored another Kenyan team to a national record of 2:59.63. Indeed the only two times that Kenya dipped below 3:00.00 was when Kitur ran the anchor leg.

Sally Barsosio became only the second Kenyan woman to win a medal at the World athletics championships. And she did it aged only 15. She clocked 31:15.38  to finish behind two Chinese women, Wang Junxia and Zhong Huandi. Junxia would later admit that there was a state doping program in China during this period.