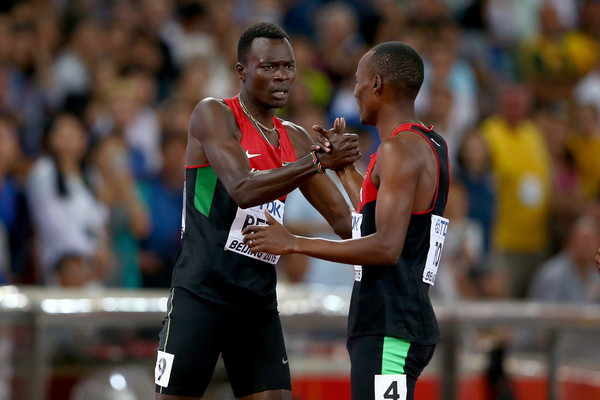 Bett did this by clocking 47.79 which is the fastest time in the world this year and a new Kenyan record. And he did all this while having the disadvantage of running from lane 9 which is the worst lane to run from in any one lap event due to the incredible stagger.

Despite running from lane 9, Bett held on and did not allow any racer to make up the stagger. Not even the pressure of having two time world champion Kerron Clement of the USA could shake Bett. Throughout the race, the commentators only spoke of Michael Tinsley who was the favourite while not realizing that Bett was leading throughout.

The time makes Bett the 4th fastest African ever behind Matete of Zambia, Dia Ba of Senegal and Van Zyl of South Africa.  Both the second and third placed finisher set new national records. Boniface Mucheru, the other Kenyan in the race was 5th. There mere fact that Kenya had two runners in the final is in itself a phenomenal achievement.

The 2013 800m contest had been a disaster for Kenya. Rudisha was missing due to injury. Ferguson Rotich, who was Kenya’s main hope, was disqualified in the semis. As a result, Kenya did not place any runner in the finals. In the 2015 edition however, Rudisha was back and Kenya placed three runners in the final.

Whereas in the past, Rudisha would lead from gun to tape, this time he ran a more tactical race, taking the leading from the gun and fending off any runner who tried to pass him. Adam Kszczot of Poland tried to upend Rudisha in the back straight but Rudisha anticipated his move and fended him off. Rudisha would extend his lead using his classic long stride, winning in a slowish time of 1:45.84. Ferguson Rotich narrowly missed out on a medal.

Asbel Kiprop made it very difficult for himself but eventually came through to win the men’s 1500m on the penultimate day of the 2015 world athletics championships. Kiprop placed himself at the back of the pack for the first half of the race. At the start of the final lap, Kiprop was still boxed in at the very back. He only started to make his move with 250m to go. Algerian Tariq Makhloufi had what looked like a strong lead just as he did at the 2012 Olympics. But Kiprop utilized his long legs to close the gap and managed to pass both Maklhloufi and Moroccan Abdilaati Iguider with 50m to go. Newcomer Elijah Manangoi also had a strong finish coming from way back to finish second barely beating Iguider to complete a Kenya 1-2 finish. In 2011, this race also ended in a Kenya 1-2 finish with Kiprop and Silas Kiplagat winning gold and silver.

The win by Kiprop clinched Kenya’s place at the top of the medal table, marking the first time Kenya has accomplished this feat.

It was a fitting win for Kiprop who has dominated the 1500m in the Diamond League circuit winning using a variety of tactics from front running, to staying behind the back and also suddenly changing pace. Kiprop has proven that he is unbeatable at this event in 2015. In fact coming into the 2015 world championships, Kiprop was Kenya’s best bet for a medal.

Kiprop becomes the third runner to win this event three times following Nourredine Morceli of Algeria and Hicham El Guerrouj of Morocco. Kiprop is easily the most succesful 1500m runner in Kenya’s history and has the second fastest time by a Kenyan after Bernard Lagat. Coming into the 2015 world championships, Tunisian Habiba Ghribi was the favourite. She had the world best time and had won the silver medal at the 2011 world championships and the 2012 Olympics. Hyvin Kiyeng on the other hand did not have a major championship medal to her name. Her only honours so far had come at the All Africa games and the African championships. Still Kiyeng had one Diamond league win to her name in 2015 and had the second best time of the season.

It was an epic race in the final lap with numerous runners exchanging the lead. Virginia Nyambura stayed with the leading pack until 250 metres to go when she started to fade. In the final straight, three runners, Kiyeng, Ghribi and Gesa Krause of Germany were all literally neck and neck in a straight line. But Kiyeng had an extra gear which she utilized after the final hurdle to pass Ghribi and win by a hair.

Kiyeng had dimished 6th in the 2013 world championships in Moscow. Coming into the 2015 season, no one expected much from Kenyans in this event. Milcah Chemos who had been Kenya’s stalwart at this event was fading due to injuries. In 2014, no Kenyans were among the top runners. The 2014 season had been dominated by the Ethiopian duo of Sofia Assefa and Hiwot Ayalew as well as the American Emma Coburn. However in 2015, Virginia Nyambura and Hyvib Kiyeng emerged as true contenders.

Vivian Cheruiyot was back with a bang. After winning both the 5000m and 10,000m at the 2011 world championships, she experienced a mini-slump before taking time off on maternity leave. In 2015 she showed signs of a comeback when she won the 10,000m at the Bruxelles diamond league and at the Kenyan trials.

Much was expected from her and she did not disappoint, beating a strong challenge from Gelete Burka of Ethiopia to win in 31.41.31. The leading pack stayed together for 9600m. Cheruiyot took the lead with 250m to go and held off strong challenges from Burka who tried several times to pass her. It was her fourth world championship gold medal having also won gold at the 5000m in 2009.