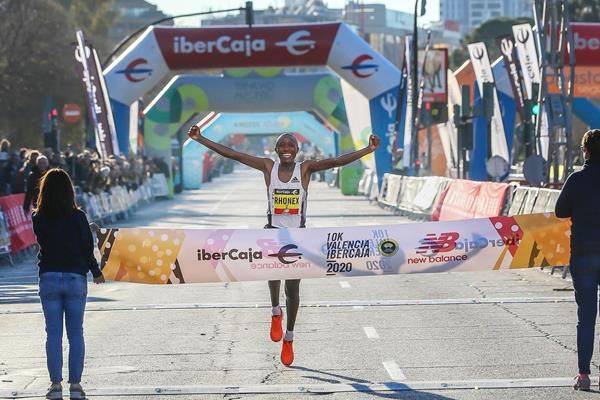 His time of  clocking 26:24 was a good 14 seconds faster than the previous record of 26:38 which was set by Ugandan Joshua Cheptegei also in Valencia 5 weeks ago. Prior to that, the record was held by Leonard Patrick Komon of Kenya who clocked 26:44 in 2010.

Secondly, Kipruto ran most of the race alone. The pacemakers had all dropped out by the 4Km mark and the rest of the field could not match Kipruto’s pace. So he ran the last 6km on his own, often smiling at the crowd.

Thirdly Kipruto set the record without the sensational Nike Vapourfly shoes which experts say have been key in most recent record breaking feats including Brigid Kosgei’s new women’s world marathon record., Bekele’s new marathon personal best that was only two seconds slower than the world record and of course Eliud Kipchoge’s 1:59 feat.

“I’m over the moon,” said an elated Kipruto. When I clocked 26:46 in Prague in 2018, I set myself the target of breaking the world 10km record and today my dream came true. I’m very thankful to the organisers for relying on me to set the record and to the city and the people of Valencia for treating me so well and for their support throughout the race.”

Kipruto is coached by legendary Iten based coach Colm O’Connell.

How does this bode for the Olympics?

At the 2019 World athletics championships, Kipruto took bronze. The race was won by Ugandan Joshua Cheptegei who is a good tactician. Kipruto likely will not beat Cheptegei in a slower tactical race. So he needs to restrategize on how he will cope with the heat of Tokyo will setting a faster pace.

The women’s 10K race was contest between three Kenyan women: Rosemary Wanjiru, Norah Jeruto and Sheila Chepkirui. At the halfway point, the leading pack had four women including Kenyan turned Israeli, Lornah Salpeter. But the latter fell off the pace, leaving the three Kenyans. Chepkirui outlasted her compatriots to win in 29:46, the second fastest time ever. The world record is held by Joyceline Jekpkogei of Kenya at 26:43.