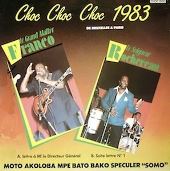 Most music fans though Franco and Tabu Ley were bitter enemies. Imagine their surprise when the two embarked on a joint project in 1983 which preduced a number of albums. The songs were produced by a combination of Afrisa and OK Jazz musicians plus guitarist Michelino Mavatiku Visi. One such album was labeled Choc Choc Choc. It contained the classic song Lettre à Mr. Le Directeur Général.

The song attacked the General Managers and Bureaucrats who were in charge of Zairean parastatals. But it was also seen by many an indirect criticism of president Mobutu sese Seko since he appointed these incompetent general managers.