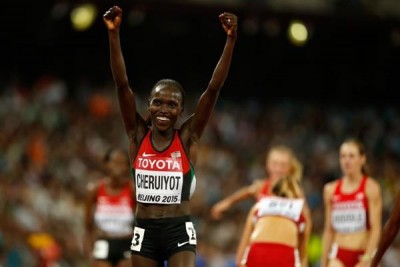 Vivian Cheruiyot is back with a bang. After winning both the 5000m and 10,000m at the 2011 world championships, she experienced a mini-slump before taking time off on maternity leave. In 2015 she showed signs of a comeback when she won the 10,000m at the Bruxelles diamond league and at the Kenyan trials.

Much was expected from her and she did not disappoint, beating a strong challenge from Gelete Burka of Ethiopia to win in 31.41.31. The leading pack stayed together for 9600m. Cheruiyot took the lead with 250m to go and held off strong challenges from Burka who tried several times to pass her. It was her fourth world championship gold medal having also won gold at the 5000m in 2009.