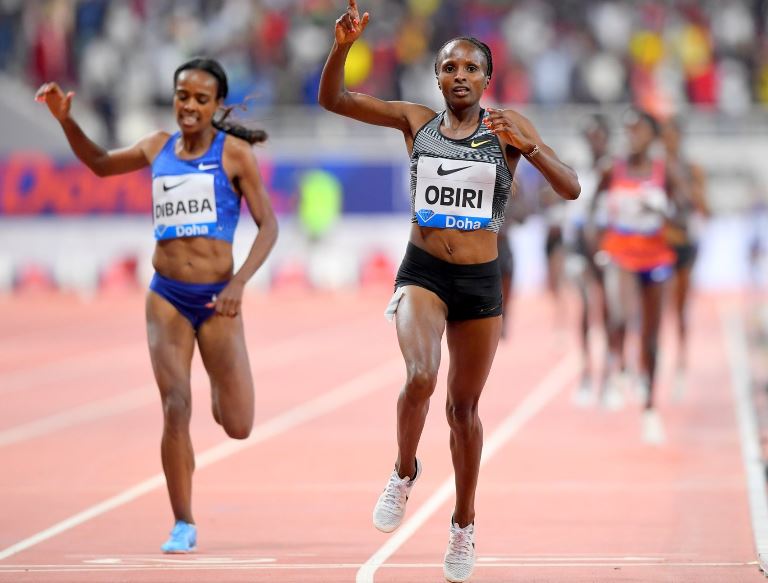 Hellen Obiri’s brilliant start to the 2019 season continued in Doha on Friday. Earlier in the season, Obiri was one of the few bright spots for Kenya at the 2019 World Cross country championships. She continued along those lines in the women’s 3000m, fighting off a strong challenge from Genzebe Dibaba of Ethiopia.

She took the lead at the bell with Dibaba breathing down her neck. Dibaba made several attempts to pass Obiri in the last time. But Obiri kept switching gears to fend off the Ethiopian who eventually gave up in the last 30 metres.

The men’s 1500m was thoroughly and completely dominated by Kenyans. Elijah Manangoi was very convincing as he won in 3:32.21, beating compatriot Timothy Cheruiyot, who beat him several times in 2018 and dominated this event. Kenyans occupied the top seven positions.

Emmanuel Korir finished second in the 800m, losing to arch rival Nijel Amos of Botswana. Another Kenyan Jonathan Kitilit was 5th. Wycliffe Kinyamal who had a brilliant 2018 season, was 8th.

In the women’s 800,Nelly Jepkosegi was fourth, a good four seconds behind the winner, Caster Semenya of South Africa.

The men’s steeplechase, an event that Kenya has dominated for the past 3 decades is now in danger of slipping out of Kenya’s hands. With Conseslus Kipruto injured, the best placed Kenya was 3rd placed Leonard Bett who clocked 8:08.61