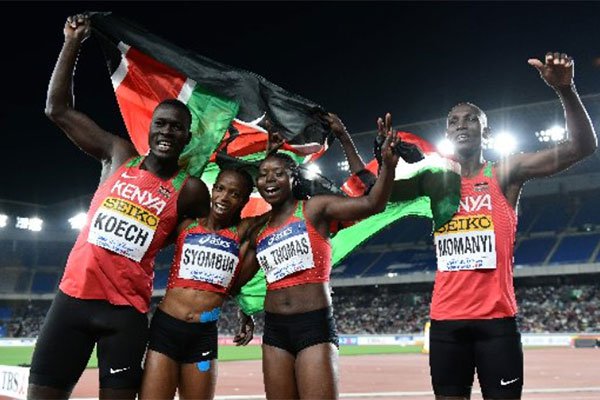 The Kenyan mixed relay quartet were the only Kenyan medalists at the 2019 IAAF world relays that were held in Yokohama Japan. The team of Jared Momanyi, Maureen Thomas, Hellen Syombua and Aaron Koech finished third in 3:19.43

Jared Momanyi started Kenya off with a solid leg, handing off to Maureen Thomas who kept Kenya in contention and in sixth place. Hellen Syombua then took over and ran a storming third leg despite being impeded by a Brazilian competitor. She took Kenya from sixth place to 3rd place and had to dig deep over her last fifty metres to maintain Kenya’s position. Aaron Koech then took over and solidified Kenya’s position, increasing the distance between himself and the other contenders for the bronze.

It was an impressive performance as Kenya beat out other traditional relay giants like Poland, Germany and Italy. It is the first time that Kenya has won a medal in a global relay event since 1993 when the Kenya 4 X 400m quartet of Samson Kitur, Simon Kemboi, Abednego Matilu and Kennedy Ochieng won the silver medal at the world championships.

Kenya finished in 13th overall position. Not bad considering that there were no distance relay events. Kenya were the highest placed African country, ahead of Sprint giants South Africa who were 14th. None of the other African teams won anything.