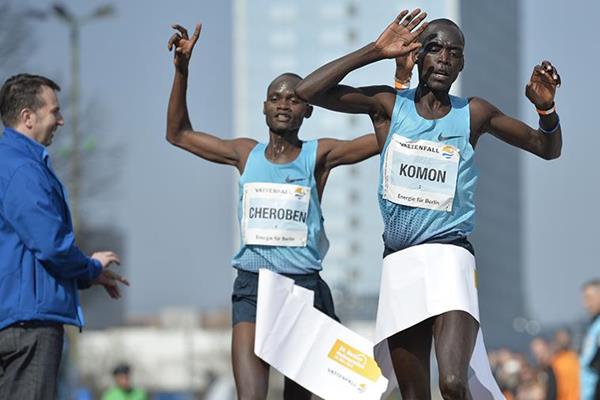 Leonard Komon clocked 59:14 to win the Vattenfall BERLIN HALF MARATHON. He edged out fellow Kenyan Abraham Cheroben in a sprint finish. Prior to the race , Komon had set an ambitious goal of setting a new world half marathon record on his debut. It was highly unlikely however and he did miss the record by 49 seconds. It was however a superb debut that foretells good things to come for Komon. Prior to this, the fastest half marathon debut had been by Moses Mosop who debuted in 59:20 in Milan in 2010.

“I am happy with my performance in my debut race. Of course I ran longer distances in training, but there is always a difference between training and competition. I thought I would be able to run sub 59 minutes. It was a challenge, but at the end there was something missing. But I know what to do and will try to run such a time in my next half marathon,” said Leonard Komon.

Richard Mengich ,Silas Kimutai and Daniel Chebii finished 3rd, 4th and 5th respectively as Kenyans occupied the top 5 positions. All runners had to contend with strong winds which slowed them down considerably.

Leonard Komon first came to the limelight when he was second in the 2008 World cross country championships. He had also finished second in the junior race 2 years earlier. As of March 2014, his personal bests in the 5000m and 10,000m are 12:58.24 and 26:55.29 respectively. However he rarely runs on the track and has never represented Kenya on the track. In 2013 he won the 49th edition of Madrid’s San Silvestre Vallecana, an IAAF Silver Label Road Race.