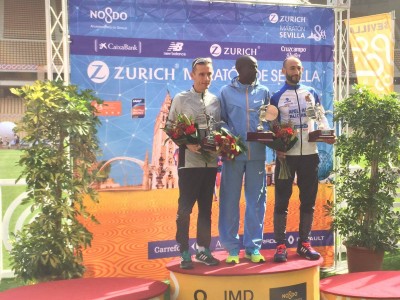 21 year old Cosman Kiplimo Lagat won the Zurich Maraton de Sevilla in a new course record of 2:08:14. In the process he regained the title he had won in 2014 in a then course record of 2:08:33.
The leading group covered the first 10 km in 29:57, paced by pacemakers including Thomas Ayeko of Uganda. At the 34km mark, Lagat made his move, shaking off Shedreck Kiptoo Kimaiyo and Geoffrey Koech. The duo could not keep up the pace. Kimaiyo ended up 11th while Koech dropped out.

“It’s my second win here, I’m delighted. I ran conservatively during the first half and decided to push the pace afterwards. The circuit is very flat and suitable to get fast times. In addition, the crowd supported me all the way. I hope to return next year to get a hat trick of victories,” said Kiplimo Lagat.

37 year old Spanish veteran Carles Castillejo finished second in 2:11:29
“Before competing today, my only doubt was whether Seville was going to be my last marathon ever or the penultimate one. Happily, I’ll be able to have a perfect farewell to my (international) athletics career by contesting my fourth Olympic Games next summer in Rio de Janeiro,” said Castillejo.