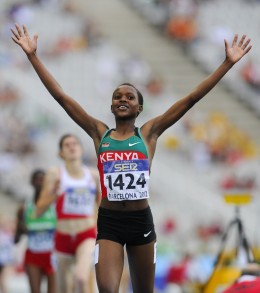 Faith Kipyegon is finally fulfilling the promise she had showed during her youth and junior days. After winning a silver medal at the recent world athletics championships, the 21 year old set a new Africa record in the one mile race at the Memorial Van Damne Diamond League event in Brussels on Friday.

Kipyegon showed a lot of promise during her junior days: In 2011 she won the world cross country championships junior event. In 2012 she won the gold medal in the world youth championships. And in 2013 while only 19, she set a new Kenya record in the 1500m.

On Friday in Brussels, she outran pre-race favourite, Sifan Hassan of the Netherlands who had hoped to challenge the world record. World indoor 800m champion Chanelle Price did the early pace making, passing 400m in 1:02.61 and 800m in 2:05.69.Sifan Hassan followed the rabbits closely with only Kipyegon following close.

Once the rabbits had dropped out, Kipyegon challenged Hassan for the lead as the pace dropped on the third lap.

Kipyegon and Hassan would jockey back and forth for the lead during the last lap. But in the last 90m, Kipyegon found an extra gear and Hassan had no answer.

In the all time list of mile runners, Kipyegon is now tied with Mary Slaney of the USA. Kipyegon’s time was the fastest time in the world in the last 19 years.