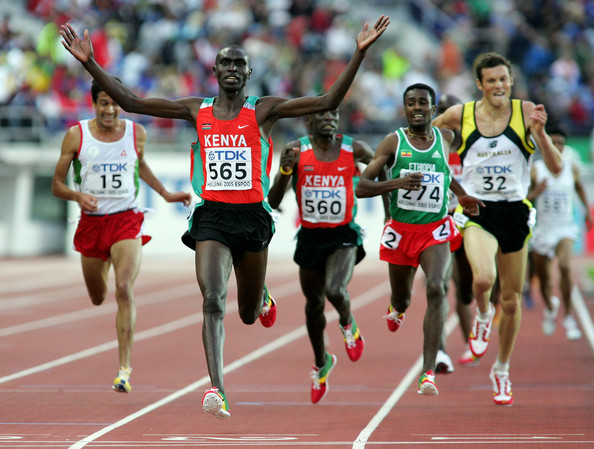 The 2005 world athletics championships were held in the Olympic Stadium, Helsinki, Finland from 6 August to 14 August. Kenya registered a below par performance with only one gold medal. The games were held at the height of the EPO era when there was no testing available for EPO. As such Kenya bit the dust in many events where they would normally do well. Kenya finished 9th overall in the medal standings with 1 gold 2 silver and 4 bronze.

Not much was expected from Benjamin Limo. The experts picked Eliud Kipchoge, the defending champion as well as Sileshi Sihine of Ethiopia and Ali Saidi Sief of Algeria. With 100m to go, it looked like Sihine was going to run away with the race. But in a masterful display, Limo shifted gears and rocketed passed Sihine who had no answer.

William Yiampoy finished third in the 800m. The winner was Moroccan turned Bahraini Rachid Ramzi. In 2009 Ramzi was busted and banned for EPO use. In second place was Russian Yuriy Borzakovskiy. A decade later, the scandal of systematic doping would be exposed. Moses Mosop finished third in the men’s 10,000m, half a second behind the winner, Kenenisa Bekele of Ethiopia. In the men’s 3000m steeplechase, Ezekiel Kemboi and Brimin Kipruto took silver and bronze medals behind Kenyan turned Qatari Saif Said Shaheen.

On the women’s side, Catherine Ndereba took the silver medal in the marathon. In the women’s 3000m steeplechase, Jeruto Kiptum started Kenya’s strong tradition in this event by taking the bronze medal. In subsequent years, Kenyan women would come to dominate this event just as the men did.