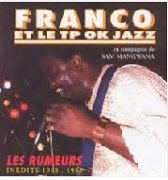 This was one of Franco’s very last songs. Though he recorded it before he passed away, it was released in 1992, three years after Franco’s passing. Franco recorded the song during the period when he had become overcome by illness, had lost almost half his weight. His thunderous bass voice had become a shell of its former self. The media and Zaireans in general had a field day speculating and rumour mongering about Franco’s illness and his impending death. Franco was very bitter about all the rumour mongering and hence he composed this song.