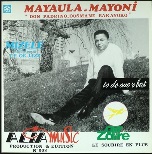 The song Cherie Bondowe by Mayaula Mayoni was released in 1975. It was highly controversial because it presented the life of a prostitute from her perspective. It was seen to be promoting or at the very least defending prostitution. The authorities in Zaire banned the song. But Franco and TPOK Jazz recorded the song in Brussels. The fact that the song was banned made it even more popular and TPOK Jazz started to perform the song in public. The Chorus is then repeated multiple times for emphasis This is a live performance of Cherie Bondowe featuring a frontline with Michel Boyibanda and the youthful Josky Kiambukuta and Wuta Mayi who had recently joined TPOK Jazz from Orchestre Continental.