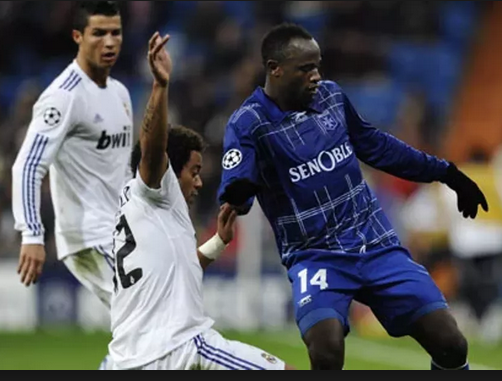 Dennis Oliech, is without a doubt the most accomplished striker Kenya has ever produced. As we write, he is the only Kenyan striker to maintain a position in the starting lineup in a team in a major European league.

He started out playing for Dagorretti Santos before he was recruited by Mathare United. He then briefly played for Tusker.

He made his international debut at age 17 in 2002. His first major tournament was the 2002 CECAFA cup held in Tanzania. Kenya had gone 19 years without winning the tournament. The 17 year old Oliech literally carried the team on his youthful shoulders. Despite coming on as a substitute in almost all the games, Oliech scored 5 goals to steer Kenya to their first CECAFA cup in 19 years. His breathtaking speed mesmerized the Tanzanian press such that they dubbed him the “turbo charger”.

His stellar performance at the CECAFA cup saw him attract interest from talent scouts across the globe. Al Arabi of Qatar came up with the best offer and Oliech joined them in 2003.

During the 2004 Africa nations cup, Oliech was once again in sensational form. He finished as the top scorer in the qualification campaign with 5 goals. Most crucial was his goal in the final qualifier against Mauritania in which he scored the winning goal in Kenya’s 1-0 win to pave the way for Kenya qualification.

At the 2004 Africa nations cup, Oliech was yet again in sensational form. His most notable performance was in the last group game which Kenya won 3-0 against Burkina Faso. Oliech set up one goal with a clever back heel to John Baraza before scoring the last goal.

Following his superb performance at AFCON 2004 Oliech drew interest from various European teams. In 2005 he joined Nantes in the French Ligue 1. At Nantes he appeared mostly as a substitute deployed late in games to use his speed to make life difficult for tiring defenders.

When his contract at Auxerre ended, Oliech appeared poised to return to Qatar. But he soon secured a deal with another Ligue 1 side. AJ Auxerre. It was here that his professional career took off.

When Oliech fast arrived at AJA, the fans were not amused. On social media and on forums they regiestered their dissaproval saying that Auxerre should never have signed a Kenyan because “we do not need marathon runners.

But Oliech soon won them over with his superb play.  He became so critical to the team that some Auxerre fans were seen waving Kenyan flags in the terraces.

In 2009, Oliech was a key performer as he helped steer Auxuerre to a 3rd place finish in the French league that saw them qualify for the European champions league for the 1st time ever. Most notable was  the 2-0 win over perennial giants Olympique Marseille in round 19 in which Oliech scored both goals.

On September 25, 2011, Oliech scored his first ever hat-trick for Auxerre in a 4–1 win over Sochaux.

Whereas Oliech was previously dependent on his natural abilities and speed, at Auxerre he improved every aspect of his game. he became more fundamentally sound even scoring several goals with his weaker left foot. His improvement in technique, a result of hard work on the training ground makes nonsense of claims that he is not a hard worker.

While at Auxerre, Oliech arranged trials for other budding Kenyan players such as midfielder Islam Omar. Hussein Terry, the director of Nairobi football academy said “Oliech has a big heart and I would like other foreign-based players to emulate him and create openings for local players. He paid for the boys’ tickets, welcomed them warmly, bought them boots and winter clothes and gave them priceless advice while at trials at Auxerre,“

The 2011-2012 was Oliech’s best season statistically. He scored 10 goals and finished with 6 assists while playing as a winger. Despite this Auxerre were relegated. Oliech was thus condemned to playing second division football with Auxerre for half a season before he eas approached by Ligue 1 side Ajaccio

On January 22, 2013, Oliech was unveiled by AC Ajaccio of Ligue 1 after completing a move from Ligue 2 side Auxerre and signing a two and a half year contract. He was handed the number 29 jersey and went on to score on his debut against Evian in a 1-1 draw.