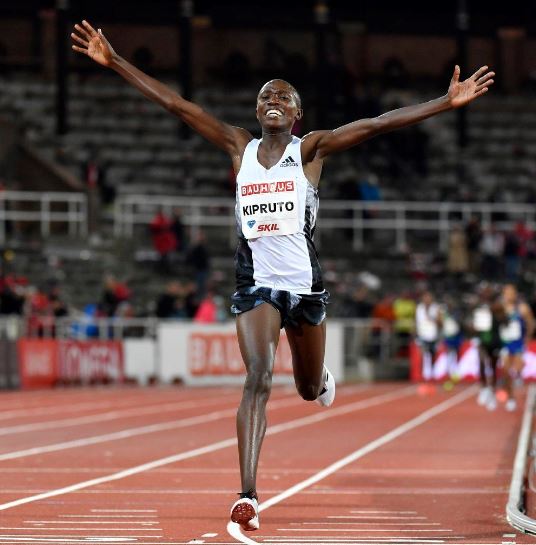 The trio of Kenyans: Rhonex Kipruto, Agnes Tirop and Timothy Cheruiyot were in sensational form as they beat strong fields to win at the 2019 Bauhaus Galan Diamond League meet in Stockholm Sweden.

It has been 18 years since a Kenyan won the 10,000m at the world athletics championships. The last Kenyan to win this event is Charles Kamathi who shocked Gebreselassie in 2001. But fast rising Rhonex Kipruto who was only two years old when Kamathi won that shock gold medal, had a brilliant run in Stockholm that gave Kenyan fans reasons to have optimism. He blew away a very strong field that included 2016 Olympic silver medalist Paul Chelimo of the USA and Olympic bronze medalist Hagos Gebrhiwet.

Kipruto gave a masterful display, setting a torrid pace. By the halfway mark of the race, he was already 50 metres ahead of most of the field. The only runner who tried to keep up the pace was Gebrhiwet. The Ethiopian stayed on Kipruto’s shoulder until there were 3 laps to go. At that point Kipruto shifted gears again, increasing the pace and Gebrhiwet started to gnash his teeth, showing that he was struggling. The gap between the two started to increase. By the end of the race, Kipruto was almost 50 metres ahead of Gebrhiwet and had overlapped almost everyone else. He won in 26:50.16 which is the fastest time in the world since 2017

With his brilliant display, the 19 year old Kipruto appears a strong candidate to win the 10,000m at the 2019 world championships. His main challenger will be the Ugandan Joshua Cheptegei who earlier this year, won the world cross country championships.

Agnes Tirop beats a strong field in the women’s 5000m The biggest shock of the day came in the women’s 5000m. Agnes Tirop who in 2015, won the women’s senior cross country championship when only 19 years of age, is finally fulfilling her promise on the track. It was a very close race with the leading runners reaching the bell at the same time. Canadian Gabriela Stafford took the lead with 200 metres to go and appeared poised to snatch a shock victory. But Tirop responded, unleashing a strong kick at the final bend, passing Stafford. The shock of the day was Hellen Obiri who finished in 12th position. Obiri has been in superb form this season.

Timothy Cheruiyot, who dominated the men’s 1500m in 2018, is once again showing the sensational form he displayed last season. Cheruiyot won the 1500m in Stockholm at a canter, finishing two seconds ahead of his closest challenger, Ayanleh Souleiman of Djibouti. Elijah Manangoi who won the opening Diamond League meet of 2019, inexplicably finished in 10th position, a good 13 seconds behind Cheruiyot.