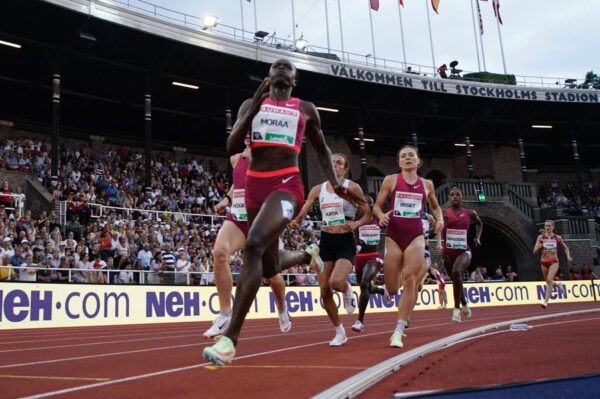 Kenya has always had excellent 800 metres runners in the men’s category. However on the women’s side, success has been fleeting. That is with the exception of the period between 2007 and 2013 when Kenya had world beaters like Janeth Jepkosgei, Pamela Jelimo and later Eunice Sum. Since 2013 however, Kenya has not had a global medal contender. Enter Mary Moraa. She had shown a lot of promise as junior runner. She is now coming into her own as a senior.

The Stockholm meet on Thursday June 30 2022 was her global coming out party. There she would challenge top British runner, Keely Hodgkinson, the 2020 Olympic silver medalist. She surged into the lead after 200m before ceding to the pace-setter. Once the pace-setter pulled aside, Moraa took the lead with 200m. With her upright gait she extended her lead such that with 50 metres left, she had what seemed like an insurmountable lead. Hodgkinson made her move at that point but it was too late to close the gap.

With that win, Moraa emerges as a medal contender for the 800m title at the world championships where she will face formidable challenges from Athing Mu and Ajee Wilson of the USA as well as Hodgkinson of Great Britain.