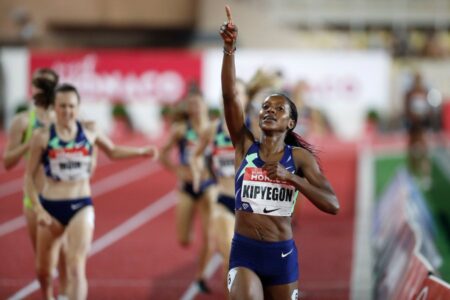 After a long layoff occassioned by the Covid 19 pandemic, athletics is back. And Kenyan athletes were back in action with dominant performances.

The rarely run race pits 1500m runners against 800m runners. As such this was a contest between milers Faith Kipyegon and Laura Muir on one side, against half milers Halimah Nakaayi of Uganda, who is the reigning world champion and Raevyn Rogers who won the silver medal in the 800m at the last world championships.

In the end, endurance won. Both Kipyegon and Muir set a pace that none of the half milers could match. Then Kipyegon displayed her extra gear to leave the rest of the field chasing her shadow. She obliterated what was supposed to be a very strong field.

Kipyegon is showing that childbirth did not slow her down. In fact it may have strengthened her. She looks a lot stronger now. Reigning world champion Hellen Obiri was equally dominant. She was pitted against Sifan Hassan, who set the world alight in 2019, dominating the 1500m, 5000m and 10,000m in amazingly style. Also in the race was Letesenbet Gidey, silver medalist in the 10,000m at the last world championships. With 3 laps to go, the quartet of Wightman, Hassan, Obiri and Gidey had split away from the pack. Then Weightman fell off the pace. Hassan who had been struggling, dropped out with two laps to go, leaving Obiri and Gidey to battle. The duo exchanged the lead a few times, as Gidey tried to shake off Obiri. But Obiri stayed on pace. Then she delievered her signature acceleration move in the back straight and as expected, Gidey had no answer for Obiri’s extra gear. No one does nowadays. Obiri clocked an impressive 14:22.12 Timothy Cheruiyot, who has dominated the men’s metric mile for the past 3 years, was back to his imperious form, holding off a determined effort from Norwegian youngster Jakob Ingebrigtsen to win the race in 3:28.45. In the last lap, the Norwegian stayed close to Cheruiyot and for a while it seemed like he could pull an upset, but in the end, it was Cheruiyot who had an extra gear. A brilliant win for the Kenyan miler who has dominated this event for the past 3 years.