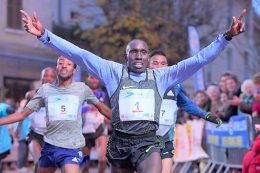 The race ended with a ferocious battle over the last 300 metres as 5 runners vied for the podium. Kangogo proved to have the most horsepower left and just as he did last year, winning in a blanket finish. Only one second seperated the 5 leaders. Viola Kibiwott who is known mostly as a miler, had a glorious debut as a 10K runner when she broke the course record. And she did so in dominant fashion, finishing over 30 seconds ahead of second placed finisher, Katrina Wooton.