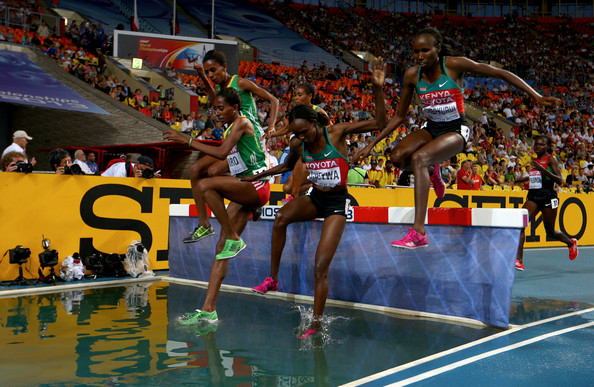 Kenya’s 3000 metre steeplechase star Milcah Chemos Cheywa has been upgraded to bronze and silver medals at the 2012 London Olympic and the 2011 IAAF World Championships respectively after Russian Yuliya Zaripova was stripped of the Olympic and world titles by the Court of Arbitration for Sport for doping violations.

The Court of Arbitration for Sport (CAS) upheld an appeal from the International Association of Athletics Federations (IAAF) against the “selective” disqualifications handed down by the Russian Anti-Doping Agency (RUSADA) to six of their athletes. Apart from Zaripova, Sergey Kirdyapkin has also been stripped of his world title as CAS revises bans for the six Russian athletes. Zaripova’s disqualification means that Tunisia’s Habiba Ghribi is elevated to the gold medal and Ethiopia’s Sofia Assefa of Ethiopia moves up to silver as Chemos is upgraded to bronze. And since the World Championships fall within the ban period, Ghribi will be declared the 2011 world champion with the Kenya’s duo of Chemos and Mercy Wanjiku promoted to silver and bronze respectively.

Zaripova has had all her results between July 20, 2011 and July 25, 2013, annulled, while her compatriots Olga Kaniskina, Valeriy Borchin, Vladimir Kanaykin and Sergey Bakulin have also had their suspensions revised.

A culture of cheating?

Every nation has cheaters. However the Russians have taken cheating to extreme levels. So bad is the cheating in Russia that in November 2015 the Russian Federation was given an indefinite ban after a report by a German TV station did an exposee showing the existence of systematic doping (doping that is sanctioned and controlled by the suthorities) in Russia.

Russia has won more medals at the world athletocs championships than every country except the USA. The women are especially dominant in middle and long distance events. Many times, a Kenyan athlete has been denied a medal by Russians. At the 2008 Olympics, Eunice Jepkorir finished second and a good nine seconds to Russian Gulnara Galkina who clocked 8:58 for a new world record. At the 2009 World championships, Chemos finished behind another Russian Yuliya Zarudneva.