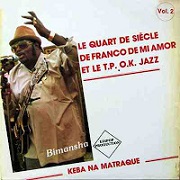 It is a song that features a discussion between two women. One of the women tells the other that her husband has been trying to woo her by complaining that his current wife does not cook well, does not clean the house and is generally not a good wife. <The song concludes with some brilliant guitar wizardry by Franco>

12 thoughts on “Mujinga by Franco & TPOK Jazz (Translation and Lyrics)”