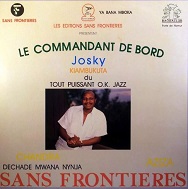 The song Mibali Basala Attention which translates to “Men beware”, was composed by Josky Kiambukuta around 1990. It was on Face B of the Chandra album and was one of the first albums released following the passing of Franco in October 1989.

A man who has had a bad experience with his marriage makes a public service announcement to all other men. He advises them to be wary of women who attach themselves to material advantages. The story also highlights the responsibility of the in-laws. <Madilu solo in a different language, likely a Kikongo dialect>