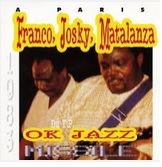 1983 was a very productive year for TPOK Jazz. That year, OK Jazz produced 10 albums. Among these was the album Choc Choc Choc featuring Franco, Mavatiku Visi (Michelino) and Josky. In this song Josky provides the chorus line while Franco provides the lead vocals. It is a song in which Franco admonishes people not to butt into other people’s affairs especially their marriages