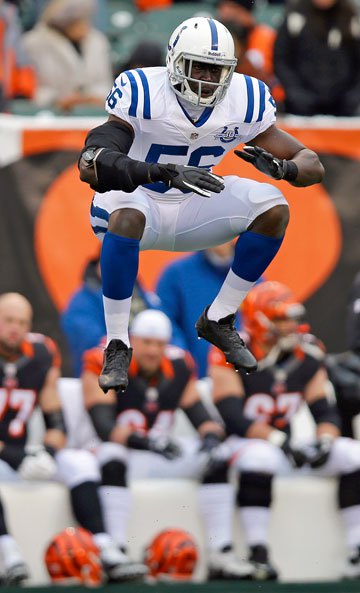 On Sunday December 8, Kenya’s rugby phenom, Daniel Adongo played in his first game ever in America’s National Football League. It was yet another step in an unlikely journey that has taken Adongo from Kenya Harlequins Junior team in Nairobi, to the Natal Sharks Juniors in South Africa then to Blue Bulls of South Africa’s Currie Cup to Counties Manukau in New Zealand’s ITM cup then to Tuks in South Africa’s Varsity cup, then to Southern Kings in the Super series.

How did Adongo end up in the NFL ?

Adongo was used very sparingly by the Southern Kings and also by the Blue Bulls. In fact this was the story of his career in South Africa. While playing for the Blue Bulls in 2012, Adongo excelled every time he was given a chance but for various reasons, often found himself dropped back to the bench after long periods.

Some said it was because Adongo while supremely gifted, was miles behind other players in New Zealand and South Africa in terms of tactical nous. “He was a strong player with all the physical attributes to do anything,” Says Tana Umaga the New Zealand rugby legend who recruited Adong. “In New Zealand. Boys are born into rugby . Adongo probably lacked the game sense”, Umaga continued.

With proper game sense, and with his physical attributes, Adongo would have been a shoe in for a position with the Springboks or the All Blacks. In fact when he was only 17, the Kenya sevens setup tried to recruit him but he had his mind set on playing for the Sprinboks. But it was not to be.

The Indianapolis Colts for whom Adongo now plays are always searching the globe for rugby talent, that might have skill-sets transferable to the NFL. Adongo’s agent John Gbenda Charles who is based in Hong Kong thus shopped his client to the Colts. On July 30 2013, the Colts signed Adongo.

When the Colts signed Adongo, most pundits doubted whether a rugby player however physically gifted could develop enough to actually help the Colts. Colts  general manager Ryan Grigson, the man who green-lighted the move to sign Adongo, admitted the athlete was “a total long shot” and called the signing “somewhat of an experiment.”

Adongo was basically starting from scratch. He had to learn how to strap on his helmet, put on his pants and his pads. It is unlikely that he had ever watched an American football game much less played in one.

But Adongo’s biggest impediment was the fact that he was competing for a roster spot with supremely talented players who have been playing the game since age 7. Youth development and scouting for the sport of American football is highly developed. Most players start playing at age 7 and even by that age they play under adult supervision. They then play through various age groups such as U10 and U12. By the time they get to secondary school, they are already highly knowledgeable about tactics and many have already specialized in their positions. The primary goal of most elite high school players is to earn a scholarship at a Division 1 University. They thus put in a lot of hard work and many parents actually hire private coaches. The best high school players earn scholarships to Universities where they are required to play for at least three years. The very best of the University players are then selected to NFL via the annual draft. There are 119 Universities in Division 1A and 123 in Division 1AA. Each has 70 plus players.

So each year there almost 6000 college seniors and Juniors who are eligible to be selected for the NFL draft. Many apply and very few , only the elite ones are selected. It is these supremely gifted players who have spent over a decade sharpening their skills that Adongo was competing with for a roster spot.

The fact that Adongo has made it into an NFL team roster ahead of thousands of elite athletes, many of whom played for some of the best Universities is itself amazing  and the stuff movies are made. The odds are indeed steep and are a testament to Adongo’s physical abilities and commitment. “It’s remarkable,” said teammate Weslye Saunders. “Kind of ridiculous.

At 6 foot six inches and 247 pounds (112 kg), Adongo is massive. And he has the speed of a sevens centre. Were he in the Kenya sevens team, with his size and speed, he would have been unstoppable.

His physical tools are perfectly suited for American football where positions are far more specialized. A player can thrive in the sport by doing only one thing really well.

When Adongo was first signed, he was clearly not ready to play for the first team. He was assigned to the practice squad which is a is a group of players on a team whose task is to emulate future opponents for the featured (or starting) players.

The idea was for Adongo to learn the game without the pressure of performing. In each American football team there are three sets of sub-teams each of which is on the field at different times: Offense, defense and special teams.

Six months after being signed, Adongo has been promoted from the from the practice squad and is now playing for the first team as part of the the special teams which are units that are on the field during kicking plays.

“With my skill set from rugby, I think that’s more transferable right now on special teams,” Adongo said. His primary task in special teams will likely be to protect his kicker from potential blockers when his team is kicking and to block the opposing teams kicker when  his team is receiving the kick. He will also be called upon to receive kicks and tackle kick receivers as they run with the ball. Special teams players are usually on the field for the briefest period compared to offense and defence players.

Should Adongo continue with his upward progress, he will then move into a defence position where he will play as a pass rusher with the primary task of upending the opposing teams quarterback before he can throw the ball. Adongo is uniquely suited for this postion as it requires a player to be big, strong and athletic, all attributes that Adongo has in spades.

After learning the basic rules of the game, Adongo now had and still has the monumental task of learning the intricacies and nuances of NFL tactics which is like a game of chess. The sport is highly scripted unlike rugby or football which is more spontaneous. Every move is directed by a coaches who are known as coordinators.

And he is learning. Adongo has aligned himself with players who have been consistently successful in the NFL. He’s been joined at the hip with Mathis and defensive end Cory Redding, showing his inquisitive nature and thirst for knowledge. “He’s taken the language and the lingo and digested that and even regurgitated it and come to us and asked questions where we have to go back and check our playbooks,” Mathis joked.

One thing he will find infinitely harder to do in football is catching a high ball. To begin with, the ball is smaller than a rugby ball. Secondly, the person receiving the ball often has several defenders bearing down on him at a high speed. This makes the task of catching a high ball more nerve wracking than in rugby where it is usually only one player chasing the receiver His first attempt at catching a ball in real game situation ended with the ball slipping through his hands.

Adongo has work to do when it comes to catching and he is indeed working at it. He has spent Tuesdays (his weekly day off) at the practice facility, watching film and working out while teammates rested. He spent his Friday nights there, too, working with defensive quality control coach Brad White to master the game as quickly as possible.

“Adongo is one of the first five people in the building and the last five to leave,” wide receiver Da’Rick Rogers says.

The Most Physical Team Sport

Adongo also had to learn differences between rugby and American football which could make the difference between staying safe and being critically injured. American football players have far fewer protections than do rugby players. For example, it is common in rugby for a playing receiving a high ball to jump for it because in rugby , tackling airborne players is against the rules and will earn a player a stint in the sin-bin. In American football on the other hand, an airborne player can be tackled. Adongo therefore has had to suppress the instinct to jump when receiving a high ball. “I did think about jumping,” he says, “but I remembered in football you can get hit in the air, so I didn’t leave my feet.”

He will also find that in the NFL, hard jarring hits that are aimed to dislodging the ball are more commonplace than they are in rugby because players are wearing helmets and pads.He has to learn how to protect himself better from jarring hits.

The week before he was promoted to the playing unit, Adongo and Colts linebacker Kelvin Sheppard were chatting in the trainers room when Adongo said something that stuck with Sheppard in the coming days. “He said, ‘Shep, my time will come. I’ve just got to keep working,’” Sheppard says. “The next day he was promoted.

On December 8, he lined up for the first time ever, playing in front of a crowd of 60,000, which is three times the number of spectators he was used to playing in from of in South Africa and New Zealand.

I was nervous,” Adongo says, “but I subdued that because I had an obligation to the team and my brothers here to perform. Adongo asked for pointers on the sideline from fellow Colts special teamers, and commented that the game was way faster than practice. Veterans said he didn’t seem nervous for the circumstances. On one special teams play, Adongo met Bengals linebacker Vincent Rey, “I knew he was out there,” Rey said. “I had to make sure I didn’t get wrecked. He seemed as good as anybody else out there, and he’s huge. He’s going to be a force to be reckoned with.”

When Adongo was signed, his annual salary was US$ 405,000 or approximately Ksh 35 million per year. Its is a far cry from his days in New Zealand where he was paid $12,000 for 12 weeks. His current salary is still close to the NFL minimum wage.

Should Adongo continue to progress, his wages will surely rise. The average line backer or pass rusher in the NFL makes approximately $1.2 million. In essence it means that in his peak, Adongo could be making as much money as the top rugby players in the world such as Daniel Carter of the New Zealand All Blacks who is paid $1.6 million per year.