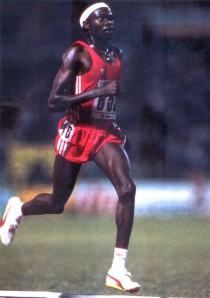 In September of 1987, Kenya went to the world championships with absolutely no expectations of any medals from fans. Remember that the previous world championships were held in 1983. Not only did Kenya not win any medals at all, but the best placed Kenyan in any event was in 7th place. And despite the fact that John Ngugi and Paul Kipkoech had gone 1-2 in the world cross country championships of 1986, not much was expected from them on the track.

Going into the race, the Italian Fransisco Panetta, holder of the world leading time was considered the hot favourite and the home crowd rooted for him with vigour. Another Italian Alberto Cova had won the previous world championships 10,000m. Also in the race was Ethiopian dangerman Wodajo Bulti , Mexican Arturo Barrios, a road racing legend who won several city marathons and half marathons and Martti Vainio who was a bronze medalist at the previous world championships.

Kipkoech started the first race in last position way behind the leaders. Suddenly at the beginning of lap 3, he shot to the front of the pack and started to open a lead. Some of the runners tried to respond to his surge.  He then slowed down and let the field catch him again. At that point it seemed like a tactical error by Kipkoech. However a few laps later, Kipkoech surged ahead of the field again. And once again slowed down to let the field catch him.

Kipkoech’s tactics were done with the knowledge that European runners ar not as good at handling variations in pace as their East African counterparts are.

With 4 laps to go Kipkoech surged again. This time he did not slow down. The field must have thought that he was going to slow down again to let the field catch him. But he continued to open up a gap.

With four laps left, Only Francisco Panetta started to give chase, urged on by the partisan home crowd. However he was already 50 meters behind Kipkoech at this time.

With 3 laps left, Kipkoech was so far ahead of the field that he started to overlap most of the competitors including Ethiopia’s Wodajo Bulti. Can you imagine a Kenyan runner overlapping the top Ethiopian today ?

With 2 laps left, Kipkoech’s gap and overlapping caused so much confusion in the field that bell announcing the last lap was rung with 2 laps left for the remaining runners. It confused some runners to the point that some actually stopped after 24 laps only to be told that they still had one lap left. Such was the case with the British runner Steve Binns.

In the end, Kipkoech finished 10 seconds and a good 60m ahead his closest challenger Panetta. In the process Kipkoech set a championship record at 27:38.13 seconds.

This author once shared a hospital ward with Kipkoech at Forces Memorial hospital and remembers him as the court jester of the ward. He raised our spirits quite a bit with his constant jokes and pranks during a time when some of us were in bad shape health wise. He ran this race with the same nonchalance and easygoing nature that he had in that hospital ward.

Sadly Kipkoech passed away some time in 1995. May he RIP The video of this epic race can be seen below