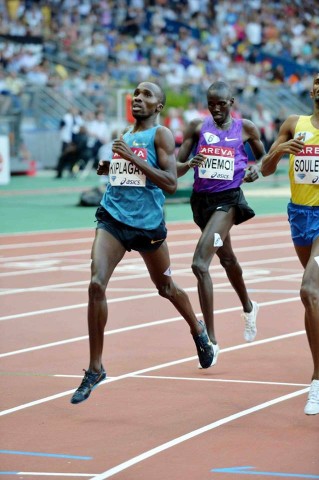 Silas Kiplagat and Asbel Kiprop have dominated the 1500m in the diamond league for the past three years or so. But last season, Ayanleh Suleiman was the one miler who gave the Kenyan duo a run for their money and even beat them on some occasions.

On Saturday in Paris, Kiplagat went head to head with Suleiman and Kiplagat emerged the victor but barely. Also in the race was Algerian Olympic gold medalist Taoufik Makhloufi who only last week, ran the fastest 1000m time since Noah Ngeny of Kenya set the record in 1999. Makhloufi was beaten into 4th place by Kenya’s Ronald Kwemoi.

As the last lap begun, Makhloufi was in the lead and seemed set to repeat his heroics from a week ago. Trailing right behind him was Suleiman. Kiplagat was a distant 3rd. But Kiplagat made his move in the final straight, leaving Makhloufi for dead. Suleiman gave chase and tussled with Kiplagat for the lead but the Kenyan held on even as Suleiman desperately leaned at the finish.

Eunice Sum who has dominated the women’s 800m since 2013, was once again in imperious form when she won the race at the Areva Diamond League meet in Paris. In the process, Sum set a personal best of 1:56.99 which is the fastest time of the 2015 season. And this was despite having to deal with terrible pacemaking.

Sum as usual took up a position right behind the pace maker before taking over the lead with 250 metres to go. Rose Mary Alamanza tried to challenge Sum but the latter was too strong down the stretch.

Sum now looks to be a strong favorite to win the gold medal at the world championships in Beijing.

Jairus Birech may have won the 3000m steeplechase in Paris on Saturday but Kenyans are now on notice that there is a strong new contender on the scene. American Evan Jager was leading and running a 7:55 pace before he stumbled and fell over the last barrier, thus allowing Birech to pass him. Jager is part of a new generation of very good American distance runners who are suddenly challenging the dominance of the East Africans.

After Jager fell at the last barrier, Birech came by and won in 7:58.83. Jager got up and finished in 8:00.43. The result must come as a shock to Kenyans who thoroughly dominated this even at the last Diamond League meet only two weeks ago.

There is a revolution going on in American distance runners as their coaches and chemists push the envelope with new strategies. The net results is that the US has been able to challenge the hegemony of the East Africans most notably at the world relay championships where the US won all the distance relays.